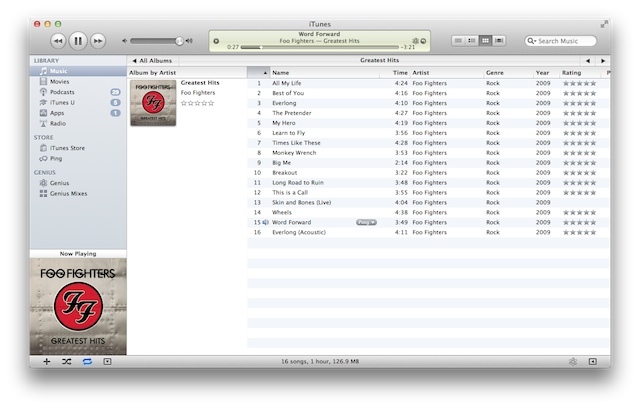 In the aftermath of the announcements from yesterday's WWDC, one particular release has seen little publicity. The beta of iTunes 10.5, which was released to developers yesterday, will bring with it iCloud and iOS 5 support when it gets officially released. But for Mac users, some more hidden features are in store.

Early reports indicate that iTunes has finally made the jump to 64-bit on the Mac platform. Users have been clamouring after 64-bit support for years, ever since Apple started advertising 64-bit in Mac OS X. iTunes is somewhat late to the party, with Snow Leopard bringing most of the built-in apps into 64-bit territory.

Furthermore, the fullscreen feature of Mac OS X Lion is supported. The mode currently resembles the usual interface with the title bar cut off, in a similar style to other Lion apps. We may have to wait until iTunes 11 before we see a more iOS-like interface, like the elements slowly making their way into Apple's other apps.

The interface has received a few minor tweaks. Gone are the awkward lilac scrollbars, instead using Lion's new disappearing ones. Elements have been slightly tweaked throughout. Apple has also apparently reversed its decision on having vertical window controls.

iTunes 10.5 is expected to be released alongside iOS 5.

Credit to forum member ThothTD for the tip and image