When Amazon launched its Kindle eBook reader back in 2007, chances are that they didn't see their primary competition coming from a cell phone. However, it's now 2010, and Apple's iBook app is quickly inching its way into Amazon's virtual publication territory. Amazon may have a few years head start, and publishing deals that go far beyond what Apple can currently offer, but Apple has the distinct advantage of packaging their eBooks app into a device that millions are purchasing for reasons altogether different than simply reading books. As the multimedia market behemoth that is the iPad continues to deliver what the consumer wants, Amazon is not afraid of using the threat to their business as a tool to grow its Kindle user base.

In a promising update to the Kindle app on the Apple App Store, according to Technologizer, Kindle is now rolling out books that feature contextual multimedia supplements such as video and audio alongside relevant text. Technologizer was unable to find a lot of content that feature this new functionality, but it is a new service, and more the amount of content will more than likely increase over time. For now, you can find video cooking instructions alongside an electronic cookbook, and audio of famous speeches transcribed in various books. Due to the increase in bandwidth consumption caused by downloading rich multimedia content, these book are currently only available for download on a wifi connection. 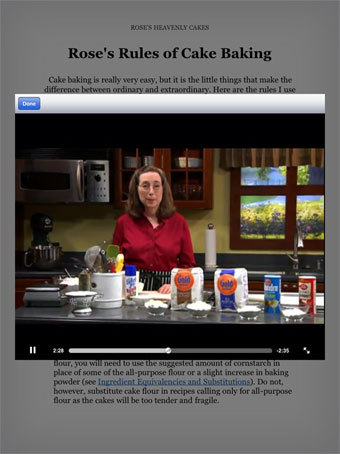 Interestingly enough, this capability is not yet available on Amazon's own eReader, the Kindle. This points once again to Amazon's brave attempt to use the same device that threatens them as a tool for market success. Amazon hasn't announced plans to port these features to it's own Kindle, Windows, or OS X, but we can't imagine they're too far behind.