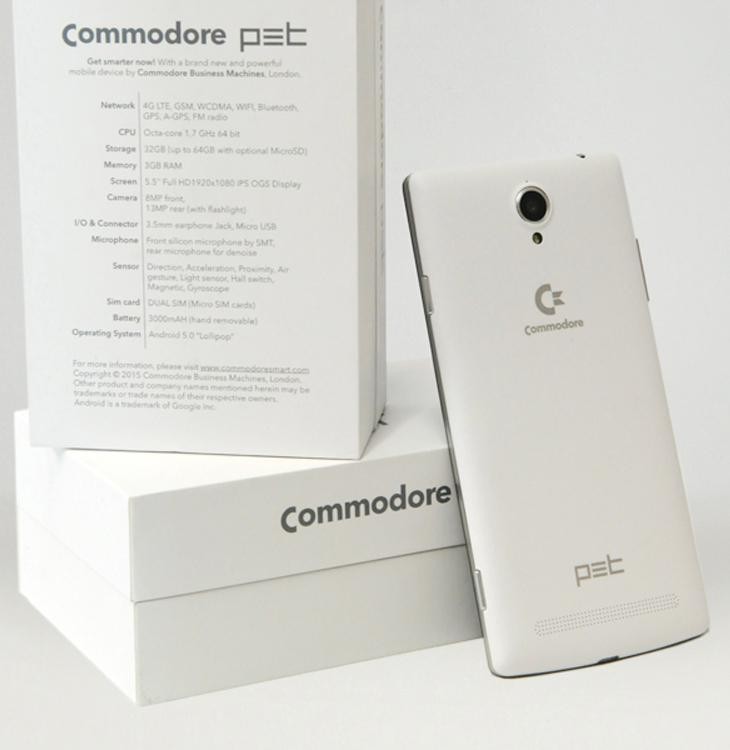 The classic brand back in the 1980's that helped popularize the world of personal computing has recently returned, in the form of a smartphone. A pair of Italian entrepreneurs, Massimo Canigiani and Carlo Scattolini, according to a report from Wired, have recently claimed they acquired the rights to the Commodore brand. This then led towards releasing a new Android phone, called the PET.

For anyone who is not familiar with the name, Commodore was a computer and electronics manufacturer in North America, and was very popular during the 1980's. The company was known for releasing two of their most successful devices ever, the Commodore 64, and its Amiga line of personal computers.

Gearing towards the new world, the Commodore PET has a 5.5-inch IPS FHD (1920 x 1080) screen with Gorilla Glass 3 display protection. The insides of the phone are powered by a 64-bit, 1.7GHz octa-core Mediatek processor and a ARM Mali T760 GPU. The handset is equipped with a 13-megapixel rear camera that can reportedly take images up to 4096 × 2304 pixels, as well as an 8-megapixel selfie shooter, with a wide angle lens. Both cameras can be operated using the dedicated camera button which can be found on the right side of the device. The PET also has dual-SIM and 4G capability.

Shelling out $300 will get you a 2 GB RAM version of the phone, which comes with 16 GB of internal memory. On the other hand, a variant of the PET that has 32 GB of internal storage and 3 GB of RAM is also available, and priced at a heftier $365. However, whichever version a buyer chooses, the PET's storage capacity can be expanded via microSD, up to 64 GB.

Lastly, the smartphone runs on a customized version of Android 5.0, and also comes with two pre-installed programs, a VICE C64 emulator and the Uae4All2-SDL Amiga, which emulates Commodore 64 and Amiga games .

The phone is available with white, black, or classic biscuit-beige swappable back covers.

Back in January, Kodak has made quite a similar gesture, returning to the public with an Android smartphone, called the IM5, after its reported bankruptcy.

The Commodore PET will initially be available in Europe, specifically in Italy, France, Germany, and Poland, with planned expansions to other neighboring countries, as well as onto the United States.