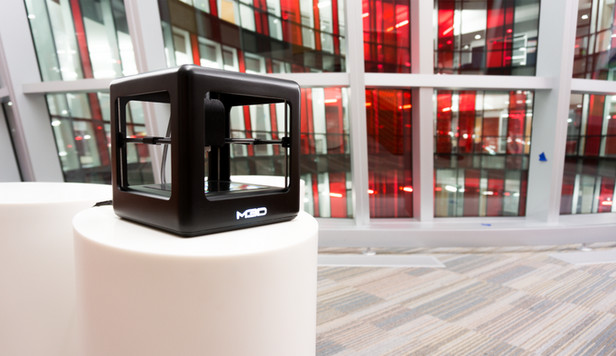 While it isn't the first 3D printing Kickstarter project, the Micro 3D printer is currently a  project that has well its funding goal of $50,000. The project has 28 days to go with over $1 million in pledges and is aiming to become one of the first affordable and accessible 3D printers on the market.

M3D wanted to introduce a printer that was affordable, effortless to use, and without major compromises. Nearly two years in development, The Micro is smaller than a normal 3D printer, uses less power than its competitors, and has features like auto-leveling and auto-calibration; these features are important because they will make 3D printing more precise. The Micro will come with its own proprietary software that will make the 3D printer easy to use. The software will be minimalistic, support touch-screens and will allow users to search for objects online to be printed.

The Micro will be able to use filaments from other companies as well as its own. If you choose M3D’s filaments, they will be able to be stored under the printer base for a seamless look. There will also be an option to feed the printer head from the top. While this printer won’t make the largest objects, it will be able to print products up to 4.5” in height; the base printing area will be 4.29” by 4.44”.

Currently, the Micro 3D printer is selling for $299 USD. Initial backers were able to purchase / back a unit for $199 and the early backers are expected to receive their units by mid to late 2014.