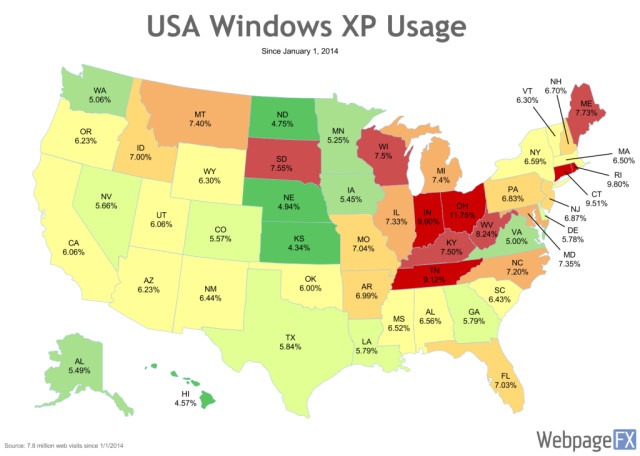 Data from web site traffic has shown that the percentage of Windows XP users can vary greatly from country to country. For example, China has over 50 percent of their PCs still using Microsoft's 12 year old OS that got its last software updates earlier today.

In the United States, it's estimated that close to 1 in 10 PCs still has Windows XP running. But does that change from state to state? A new report from WebpageFX says that is indeed the case. The firm studied data from 1,500 Google Analytics profiles and 7.8 million visits since January 1st and their stats shows the state of Ohio has the most Windows XP users in the U.S. with 11.75 percent.

Indeed, as the map above shows, the so-called "rust belt" of the U.S. has a lot more Windows XP users, with the neighboring state of Indiana in the number two spot with 9.90 percent. Nearby states like Kentucky, West Virginia and Tennessee are near the top of the list as well.

Washington state, the home of Microsoft, is as expected near the bottom of the Windows XP user list with 5.06 percent and large states like California and Texas are around the middle of the list. The state with the lowest number of Windows XP users is Kansas with just 4.34 percent.