The Start Menu was introduced all the way back in Windows 95 (“Chicago”), nearly 17 years ago. Back then, things were different. When you bought a PC, it was more than likely a desktop model, complete with a clunker of a monitor, mouse and keyboard. However, if you were lucky enough to afford a laptop, it too, was huge and clunky. You didn’t move much with it, it was heavy, awkward to use, and 802.11 WiFi was just a gleam in someone’s eye, so it too, most likely spent much time sitting on a desk.

Also, back then the Internet was a different place. Home users spent no more than one or two hours at most connected, before disconnecting and enjoying the rest of their day. There was no Twitter, Facebook, or Google for that matter, and to connect, you had to dial in over a 56k modem (fun stuff). Windows 95, just like its predecessor, Windows 3.1, was also mouse intensive. There were very few keyboard shortcuts and the Start Button on the keyboard didn’t exist yet.

Back then, there were no touch screens, Kinects, remotes, voice control, controllers, nothing. The mouse was the only game in town, and even by then it took years to catch on. Since this was also the rise of the home computer, Microsoft needed a way for users to easily find what they are looking for, thus the Start Menu was born. Flash forward to Windows 98, 2000, and the Start Menu carried on strong, basically unchanged until XP, however even though XP introduced the “enhanced” Menu, it still has the same layout it had all those years ago, but by this point, I feel it’s become a mess of epic proportions. It’s that building downtown, which despite repairs, has still managed to decay. Let’s take a look:

This is the Start Menu as we know it today in Windows 7: 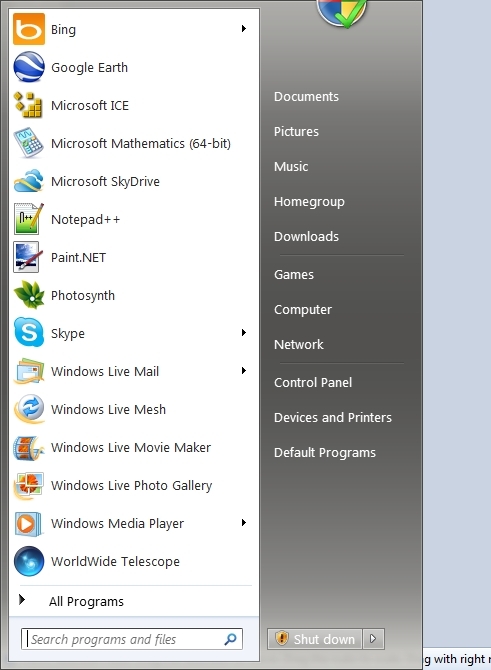 On one side, you have either your most recently or commonly used apps, or your static, pinned apps, and the toggle to trigger your “All Programs” view. On the other, you have a slim selection of system locations and services to choose from, and on the bottom, your machine’s power options.

The “All Programs” list is a carry-over from the original Start Menu in Windows 95, while the ability to pin apps is not. Pinning has made selecting my most used apps hassle free, but what happens when I need to access that one oddity that I don’t have pinned? Sure I could search for it, but some of you here have claimed it takes “too much effort” to search for it, or you don’t know the name of it to begin with. That means you’re left to browse for it. It’s not a common occurrence anymore, but it does happen.

However, “All Programs” hasn’t really received any TLC since the 90’s. Upon further inspection, it appears to be a mismatched conglomeration of folders, apps, and system widgets that God only knows go where. This isn’t something your ordinary user needs or really should have to dig through to get to where they want to be.

Read the rest of the article in our forums ->

Neowin member Dot Matrix is the author of this article, which was partially reposted from our forums.