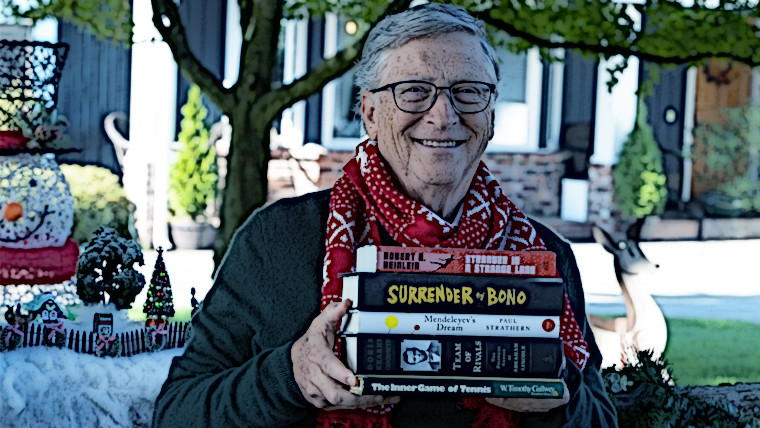 Microsoft’s co-founder Bill Gates is an avid reader. He apparently reads around 50 books per year, which works out to about one a week. Each year, on his Gates Notes blog, he shares the top books he’s read over the last twelve months. This year, he’s decided to list five of the best books he's ever read. He points out that this isn’t a complete this of his favourite books, but that he’s recommended these to friends and family.

The first book on the list is Stranger in a Strange Land by Robert Heinlein. Gates describes this book as the best introduction to grown-up sci-fi. Explaining why he likes this title, he said:

“Paul Allen and I fell in love with Heinlein when we were just kids, and this book is still one of my favorite sci-fi novels of all time. It tells the story of a young man who returns to Earth after growing up on Mars and starts a new religion. I think the best science fiction pushes your thinking about what’s possible in the future, and Heinlein managed to predict the rise of hippie culture years before it emerged.”

Next on his list is Surrender by Bono. He describes this book as the best memoir by a rock star and is one of the newer titles on the list. Going into more depth, Gates writes:

“This book came out this month, so it’s the most recent one I’ve read on my list. If you’re a U2 fan, there is a good chance you already plan to check it out. Even if you’re not, it’s a super fun read about how a boy from the suburbs of Dublin grew up to become a world-famous rock star and philanthropist. I’m lucky enough to call Bono a friend, but a lot of the stories he tells in Surrender were new to me.”

Next up is Team of Rivals by Doris Kearns Goodwin, this is described by Gates as the best guide to leading a country. He said:

“I can’t read enough about Abraham Lincoln, and this is one of the best books on the subject. It feels especially relevant now when our country is once again facing violent insurrection, difficult questions about race, and deep ideological divides. Goodwin is one of America’s best biographers, and Team of Rivals is arguably her masterpiece.”

The fourth book on the list is the best book Gates has read about getting out of your own way. The book is called The Inner Game of Tennis by Robert Gallwey. Explaining why he likes this book, he wrote:

“This book from 1974 is a must-read for anyone who plays tennis, but I think even people who have never played will get something out of it. Gallwey argues that your state of mind is just as important—if not more important—than your physical fitness. He gives excellent advice about how to move on constructively from mistakes, which I’ve tried to follow both on and off the court over the years.”

The final book on the list is the best book about the periodic table, according to the Microsoft co-founder. Mendeleyev’s Dream by Paul Strathern is described by Gates as follows:

“The history of chemistry is filled with quirky characters like Dimitri Mendeleyev, the Russian scientist who first proposed the periodic table after it allegedly came to him in a dream. Strathern’s book traces that history all the way back to its origins in ancient Greece. It’s a fascinating look at how science develops and how human curiosity has evolved over the millennia.”

If you’re still looking for Christmas presents to buy for friends and family… or maybe even yourself, one of these titles could be the present you’re looking for. Gates has selected quite a range of topics here, so hopefully you find something worth giving or reading yourself.