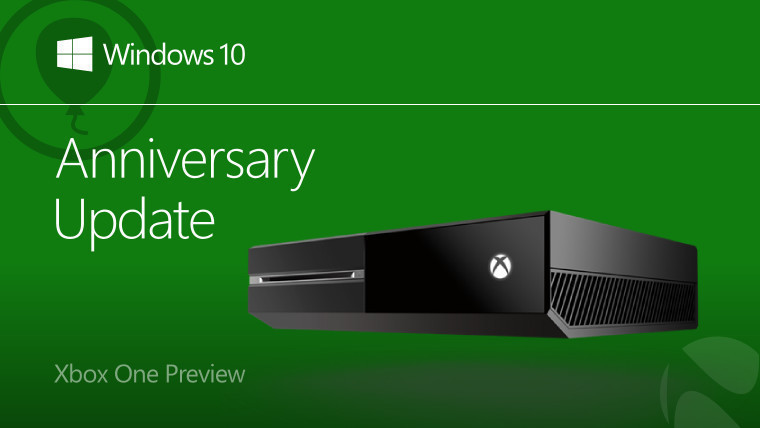 Back in March, at its Build 2016 developer conference, Microsoft announced the Windows 10 Anniversary Update, which it said would be available this summer for all Windows 10 devices, including the Xbox One. Today, it announced full details of that update, although it appears that it won't actually be one update, but two - the first of which will be coming this summer.

Starting this week, Microsoft will be rolling out an early version of the first update to those on the Xbox One Preview Program, and "in the coming weeks", it will also update the Xbox (beta) app on Windows 10 with new features to support the Xbox One release.

Perhaps the most significant addition for the console will be the arrival of Microsoft's Cortana digital assistant. Cortana will be available for Preview members in the US, the UK, France, Italy, Germany and Spain initially, but the company hasn't yet outlined its plans to expand availability to other markets. It said today:

Cortana voice commands on Xbox One will work with both headsets and Kinect. You’ll be able to use Cortana to find great new games, see what your friends are up to, start a party, accomplish common tasks, turn on your Xbox One if you’re using Kinect, and more. We’ll continue to build Cortana features over time and our vision is to use Cortana to help elevate your experience as your personal digital assistant for gaming. Just say “Hey Cortana” or launch the app to get started!

Other new features for the Xbox One include:

The Xbox app will gain improvements for those who use it with the Xbox One too:

As previously reported, Microsoft will also be merging the Xbox Store into the Windows Store, as it explained today:

On Xbox One, we’ve streamlined the shopping experience to help you find the games you love faster and at the best prices. You’ll be able to filter, browse and search results by genre, read reviews written by fellow gamers – including those voted “most helpful” by the Xbox Live community, easily recognize what titles are on sale with strikethrough pricing in lists, and more. We’ve also added several new channels to help you discover the content you love even faster. On the Windows Store, we’re adding support so gamers can browse and purchase bundles, episodic games, season passes, virtual currency and other game add-ons and DLC.

It's worth noting that, despite all of these details, there's no mention in today's announcement of support for Universal Windows Platform (UWP) apps on the Xbox One; Microsoft said at Build 2016 that this would also be part of the Anniversary Update.

However, Microsoft's Mike Ybarra, Director of Program Management for Xbox, said today that the update coming this summer will be "the first of two updates", so it seems that UWP support may not arrive until that second wave.

"For the update coming this summer," he said, "we're taking the same approach we used for the New Xbox One Experience [last November] with an opt-in program to let fans choose how they want to participate."

Microsoft says that the "new features will rollout [sic] to the Preview audience in waves, not all at once", so it may take a while before all those on the Preview program can get their hands on the new features.

Ybarra also noted that the Xbox One Preview Program is being merged into the wider Windows Insider Program. Significantly, he added that the company is now moving away from monthly updates for the Xbox One, saying that "the team will be focusing all of our efforts on the next two updates".

You can get an overview of the new features in the summer update for the Xbox One and Xbox app in the video below:

Update: Mike Ybarra has said that the first Xbox One Preview "will go out to the initial wave of people" around 6pm PST today. As noted in the article above, Microsoft has said that the update will roll out in waves, so it may take a while before it's available to everyone who opts in.