Let's face it; Microsoft's Excel spreadsheet program is certainly useful but it's also kind of dull to look at a flat 2D row of numbers. Isn't there some way that someone could turn these dull strings of numbers into something more exciting? Microsoft thinks the answer to that question can be found in a newly launched Excel add-on, GeoFlow.

The company has just announced the first public preview of GeoFlow for Excel 2013, which can be downloaded right now and used by owners of Office Professional Plus 2013 or Office 365 ProPlus. In basic terms, GeoFlow offers a way to turn Excel into a cool 3D cinematic visual experience.

The Excel blog offers up an example of how GeoFlow can be used with Excel 2013. Microsoft used a simulation of data that collects household energy use in the Dallas, Texas area. GeoFlow mapped out the locations of those households and Excel numbers were used to visualize the square footage or market value of those homes. The blog added:

A second layer was added to the presentation to show household kWh consumption as a heat map.  This data leveraged the Play option in GeoFlow Preview in order to show how the map of kWh consumption changes over time: The first day of each month was embedded in the PowerPivot data set since the Play option requires a date value so that the customer could see the ebb and flow of energy consumption over the three-year period.  Various neighborhoods were zoomed into to illustrate differences in consumption patterns between them. 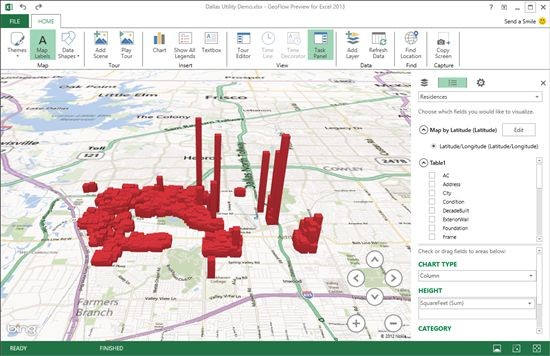 This particular demo can be replicated by anyone who uses the GeoFlow public preview. It clearly shows the benefits of displaying this kind of data via a 3D map and visuals. It can even be used to create guided cinematic tours of these 3D maps for better presentations.