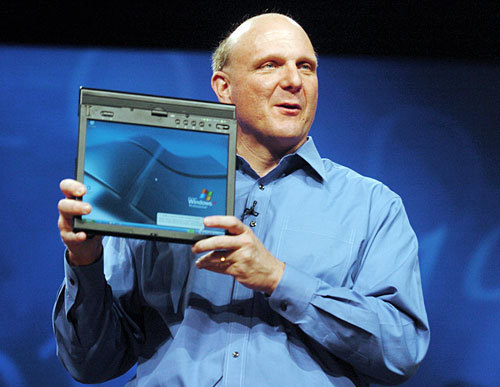 In case you haven’t noticed yet, tablets are pretty popular these days.

Even since Apple unleashed its iPad, the “post-PC” phenomenon has taken the world by storm. Manufacturers are producing tablets that not only complement the idea of a PC, but ideally improve on it. As more companies join the fray, features are improved at every iteration, and the idea of truly portable tablet “PC” is becoming increasingly real.

However, one company is noticeably behind the times. Microsoft, who has also been blamed for being late to the mobile smartphone game, is being decidedly blasé when it comes to the tablet wars. We have yet to see a competitive Windows 7 tablet, and Windows Phone 7 has no plans to become tablet-worthy. According to The Guardian, this attitude could translate into a $1.28bn loss for the company. Microsoft CEO Steve Ballmer, who has already come under pressure from the board of directors (in the form of a halved bonus payout) for underperforming in the mobile sector, looks set to fail once again in the post-PC world unless he can pull something out of an increasingly shallow consumer hat.

The number comes from an analysis of how the tablet market is eating traditional PC sales, the market where Windows makes a significant portion of its revenue. If Microsoft can’t offset that loss with innovation in the space that is eating up those profits, it could mean bad financial news for stakeholders.