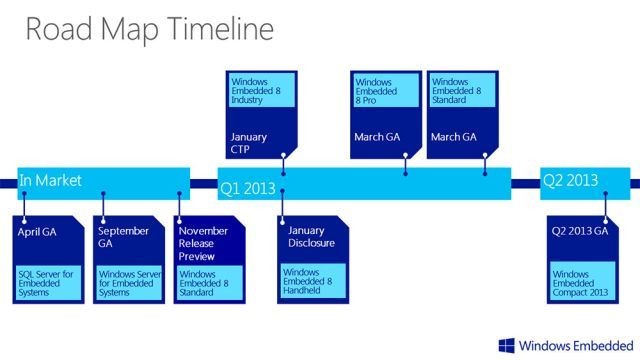 A few weeks after the launch of Windows 8, Microsoft announced that it launched a preview version of Windows Embedded 8 Standard. Today, the company used the start of the annual National Retail Federation trade show in New York City to make a number of new Windows Embedded announcements.

One of those announcements was that a preview version of the new Windows Embedded 8 Industry SKU is now available for download. The final version will be released later this summer. Microsoft also announced it is working with a number of hardware makers to create products that will run Windows Embedded 8 Handheld, which is based on Windows Phone 8.

One of the companies that has confirmed will make devices based on Windows Embedded 8 Handheld is Motorola Solutions. Before some of you you start thinking that Google and Microsoft are actually teaming up, the truth is that Motorola Solutions spun off  the smartphone-based Motorola Mobility in 2011, which was later acquired by Google. So in other words, there's no connection here.

The Home Depot has used previous versions of Windows Embedded Handheld in its stores. The home care store chain is working with Microsoft and Motorola Solutions to launch a pilot program with Windows Embedded 8 Handheld devices later this year. Microsoft says the pilot program will give Home Depot workers" ... advanced tools such as voice search and easy-to-use, touch-enabled business apps — such as those on a typical Windows Phone 8 smartphone — that can still withstand the daily rigor of the retail environment."