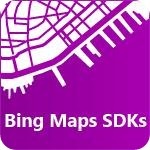 As more and more apps start showing up in the Windows Store ahead of the official launch of Windows 8, Microsoft is making some new preparations for those developers. The company has now made two different SDK packages that will allow Windows 8 app creators to put in Bing Maps support in their software products.

In a post on the Bing Maps blog, Microsoft said one of the SDK packages is for developers who are making Windows 8 apps via JavaScript. The other is for developers using C#, C++, and Visual Basic code to make their apps. Developers who have used previous SDK versions for their Windows 8 apps need to rebuild their apps with these new releases before submitting them to Microsoft for publishing in the Windows Store.

In terms of the C#, C++ and Visual Basic SDK for Bing Maps, Microsoft said:

Specific to this version; we added support for pushpins/polylines/polygons, landmarks, venue maps, traffic and Synth view map style. You can still use the Bing Maps REST services to add additional functionality such as search and driving directions. And with our own client renderer, the SDK takes advantage of the Windows 8 platform to provide an amazingly smooth and responsive map experience on x86, x64 or ARM platforms.