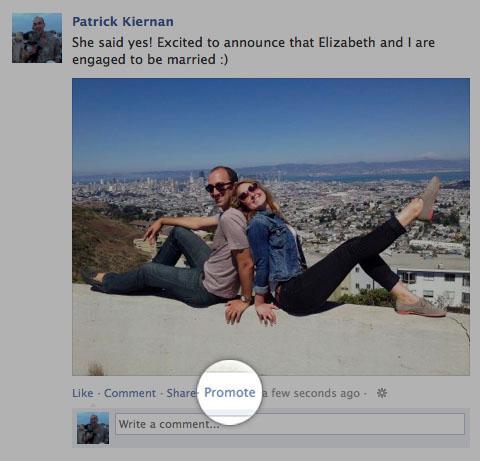 Do you want to pay money just to make sure your friends on Facebook see a particular status update in their feeds? Facebook feels the answer to that question is, "Yes." The company announced today that it has launched a new feature for US users called Promoted Posts that does exactly that.

Facebook's news release says that this feature actually began testing in New Zealand in May and has been put into practice in 20 other countries before its US debut today. This seems to be an extension of the current "highlight" feature for Facebook status updates. As Facebook puts it:

When you promote a post – whether it’s wedding photos, a garage sale, or big news – you bump it higher in news feed so your friends and subscribers are more likely to notice it.

While pricing is not mentioned in Facebook's announcement, Tech Crunch reports that the company is asking users to pay $7 for each news post they want to see "promoted." It also allows users to get some stats on how many of their friends have seen the promoted post. This service is just for people who have personal pages that contain 5,000 Facebook friends or less. Businesses which have Facebook pages have had this kind of feature for several months.

Facebook is clearly using this new "service" as a way to gain more revenue in addition to running ad banners on their site. The company's stock price is still much lower than its starting IPO price in May, although it has recovered a bit since it hit rock bottom in September.