Microsoft’s been criticized in recent years for not developing original franchises for its Xbox 360 console – and simply not developing as many first- and second-party games as Nintendo and Sony – but it appears the company is working on changing that.

According to the LinkedIn profile of Jonathan Browne, a product manager and planner for Microsoft, the company is working on four unannounced, original intellectual properties, most likely for the next-generation Xbox. The news was discovered by NeoGAF, and a screenshot of the pertinent information from Browne’s profile can be seen below. 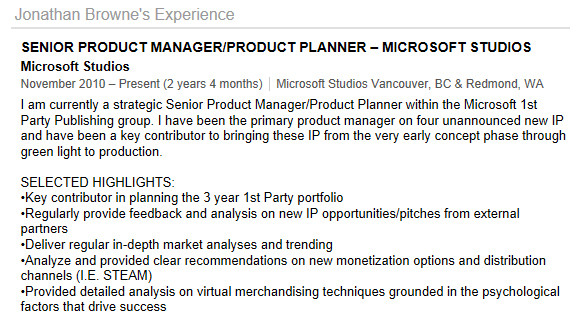 As of writing, the information is still included on Browne’s profile.

If Browne’s statement that the four original intellectual properties are unannounced is still true, that means the figure doesn’t include "Ryse," an original game Crytek is developing for Microsoft Studios, or "LocoCycle," an original game from Microsoft-owned developer Twisted Pixel.

Microsoft is expected to announce its next-gen Xbox plans in the coming months, which may include an Xbox TV set-top box and 7-inch Xbox Surface tablet in addition to a new Xbox console. Microsoft’s Larry Hyrb, Xbox Live’s director of programming, recently hinted at a June 11 E3 reveal of the company’s next-generation Xbox plans.