With a number of Windows Phone 8-based smartphones now out in the wild, their owners have been constantly using the virtual keyboard included in Microsoft's latest mobile OS. Today, the company went into detail about the auto-correcting features that have been put into the keyboard. 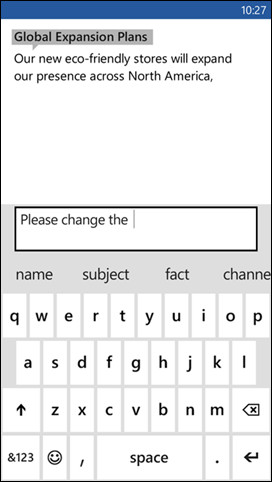 It's one thing to find and include the most common words that people will type into the keyboard. It's another for Word Flow to figure out which word would be used next when a person types a phrase out. Microsoft states:

Specifically, we look at three words of context (the fancy word for this is “trigram”) to figure out what words are best to suggest. Imagine if a user typed “I miss” and then tapped the letter “y.” Can you guess what most people are trying to type? The answer is “you,” of course, because we mostly use our phones to stay in touch with people we care about. (If you said “yodeling,” you’re in a very small minority.) Trigrams are great for common SMS phrases like “I love you”. But it also means Windows Phone knows that when you type “Harry,” you’re probably going to type “Potter” afterwards.

There's also the "fat finger" issue when a person presses down a finger that can cover more than one key on the virtual keyboard. In some situations, it could cause the wrong key to be pressed. The above video shows how Microsoft solved this problem. Basically, a key's "hit target" changes constantly as a person types with the virtual keyboard and the on board dictionary in Windows Phone 8 helps to figure out how big or small the hit target should be on each key.