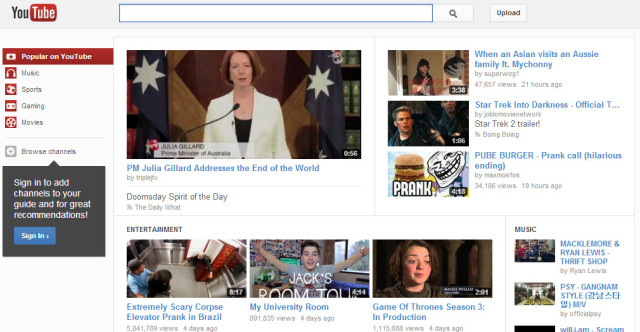 YouTube has launched what it calls a "cleaner" and "simpler" interface today, with the idea being that users will find it easier to subscribe to channels you enjoy. This new design is quite a change from the looks of the past, and takes some visual cues from Google+ and numerous other minimalistic Google products by becoming more white and using more empty space.

Major website design changes are rarely received well by their users, however the feedback to this particular YouTube design is particularly nasty. Almost every YouTube video with comments from the past few hours features some sort of complaint relating to the changes, often relating to how YouTube has made it harder to perform certain actions.

Holy s***, am I on youtube﻿ anymore? This interface is horrible!

It seems each update they﻿ make it difficult for us to find people we are subbed with recent videos.

Dear Youtube, Ever﻿ heard of the phrase if it aint broke don't fix it? [...] I have a 27" monitor and it's all squished into left hand side now...great job.

I hate this new layout so much I am about to stop﻿ using youtube.

Comments in a thread on the Neowin forums have lead to similar opinions. User Yorak described the interface as "extremely awful", while simrat described the changes as an "example of one bad design." Furthermore, one of the most viewed people on the site, Ray William Johnson, has complained about the layout on Twitter:

.@youtube I'm not much of a "Youtuber" per se, and I see what you're trying to do, but that new layout is the antithesis of user-friendly.

Many of the complaints relate to two major issues with the new layout. Firstly, uploaded videos from subscribers have been made harder to access: previously you could visit the YouTube homepage and the latest videos from subscribers would appear in a list (if you were signed in); now you have to click My subscriptions in the sidebar on the homepage, and then click the Uploads only tab to view the latest videos. 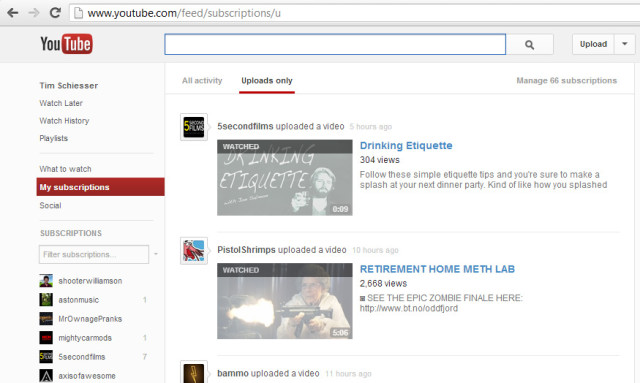 As you'll notice by the URL, the best way to view the latest videos from subscribers is no longer on the homepage

This change is made particularly confusing as the new default tab, What to watch, also includes new videos from subscribers in among other recommended or featured videos. The videos in the What to watch tab don't appear in chronological order, meaning that to revert to the previous list you have to click away twice from the homepage.

The second issue is that all content is left-aligned, which can be a problem for those people with displays larger than 1366 x 768. In the Neowin offices we have a 1080p (1920 x 1080) display, and when watching a video there is 730px of blank space to the right hand side. Depending on the size of the monitor, there is a chance that you will need to physically turn your head to the left to watch a video, as opposed to the old method of watching the video in the middle of the layout/display. 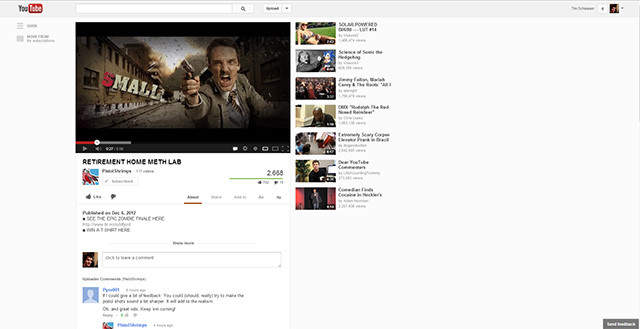 For those that want to complain to Google about the new layout there is a Send Feedback button located to the bottom right of every page. Otherwise, let us know your thoughts on what Google has changed in the comments below, and don't forget to vote in the poll as well.