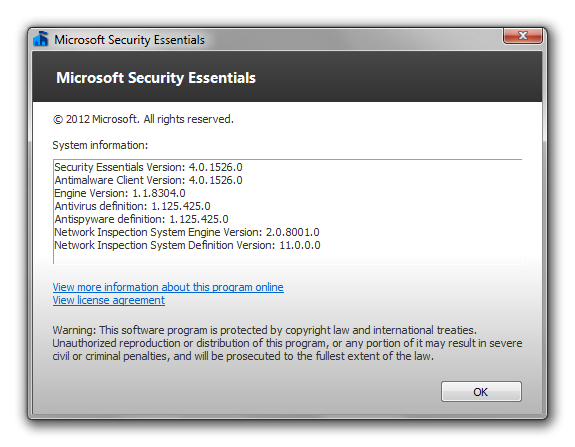 Microsoft Security Essentials, the company's free PC anti-virus and security software program, has been gaining more and more users and is becoming more popular worldwide. Microsoft launched the first version in September 2009. Recently, a third party report claims that the software was the most popular PC anti-virus program in North America and the second most popular in the world, behind Avast Free Anti-Virus.

Now it looks like Microsoft has quietly released version 4.0 of the software program. Neowin forum member +Mephistopheles posted up word of the new release in our forum earlier today. Other Neowin forum members have also reported getting the 4.0 update as well. However, there's no word on what has been added or changed in this new release.

We have emailed Microsoft to find our more information about Microsoft Security Essentials 4.0 and will report back if we hear anything from them. In the meantime, if you are a user of the program you might want to check to see if the 4.0 version is available to download. It's likely that Microsoft has set up a staggered update schedule worldwide so not everyone will be able to get the new update at the same time.

Update - Microsoft has sent over a note with their official word on what's been updated in Microsoft Security Essentials 4.0:

This update to Microsoft Security Essentials is part of the standard product update release cycle. This service update contains product enhancements to improve performance and user experience. We have improved on Microsoft Security Essentials’ Automatic Remediation, which will automatically quarantine highly harmful threats without prompting the user to take action as well as minor bug fixes in set up, malware remediation and other areas.