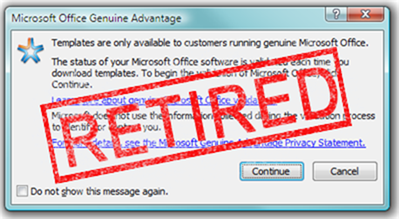 Microsoft seems to have thrown in the towel on Microsoft Office, that is when it comes to validating your Office program to verify its legitimacy. Late last week, according to zdnet.com and confirmed through a KB 917999, Microsoft has shut down the program to check whether your version of Office is genuine or not.

The silent shutdown of the program by Microsoft was unannounced, but confirmed through the KB article. Microsoft Office will now allow anyone who downloaded templates or pass through add-ins that require the genuine advantage to be completely bypassed, allowing both legitimate and illegitimate versions of Office to download and use extras.

The sudden and silent retirement of Office Genuine Advantage (OGA) means that Microsoft is giving up to prevent piracy of its community-made and in-house developed templates and other downloads.

This still doesn't mean users can install any copy of Microsoft Office, as it still requires you to enter your 25-character key and verify it through Microsoft's activation server. Office Genuine Advantage does not affect Windows Genuine Advantage, which is still an on-going program and required to install some Microsoft programs like Security Essentials.