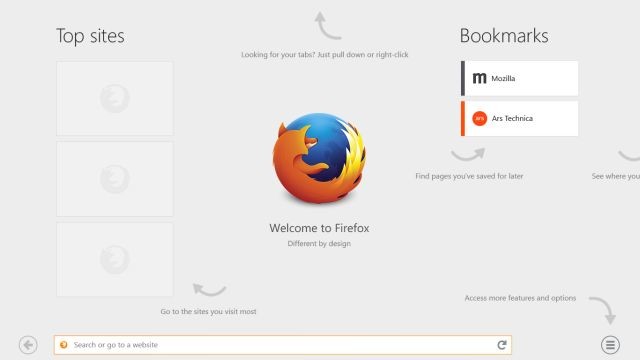 While anyone can check out the 'Aurora' beta test version of Firefox for Windows 8 right now, the folks at Mozilla are still working on the final version of the Metro/Modern UI port that is currently scheduled for release in late January. This week, the online meeting notes for Mozilla team members included a screenshot of a new start screen UI for the app.

The meeting notes page show that the mockup of the start screen will include some helpful hints for users who might be a tad confused by the new options. The screen shows any bookmarks that might be set up, the sites that are most visited by that particular Firefox user and how tabs can be accessed by right-clicking or by pulling them down with a finger if a touch screen is used.

The meeting notes add that the UI team for Firefox will begin work on the "Windows 8 First Run experience" sometime next week. That would indicate that there's still a lot of work to be done before the final version comes out of beta. We have contacted Mozilla to find out if there's been any change in their plans to launch the Windows 8 Modern version of Firefox beyond their late-January time frame.