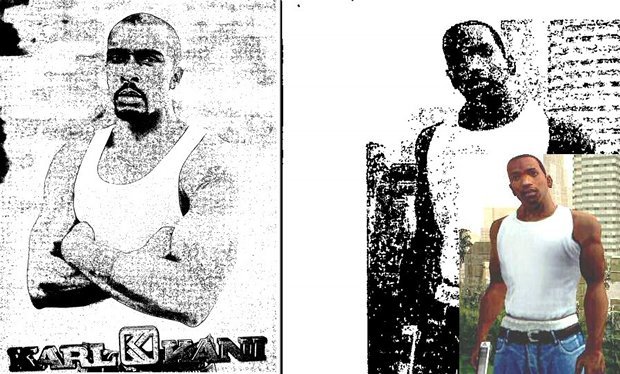 Michael 'Shagg' Washington and CJ, Rockstar's protagonist: but who is who?

Rockstar's San Andreas is probably one of the most famous games of the last console generation, telling a story of gang life in 1990s Los Angeles as one of its main elements.

Keeping it period-accurate meant Rockstar had to delve into music from the period and find people experienced with the real gang problem that plagued the city, but since 2010 one musician has argued that Rockstar ripped off his appearance for protagonist Carl Johnson. The musician in question is 'Shagg,' a backing singer from the hip-hop group Cypress Hill, whose music is used in the game. Shagg has been arguing for two years now that CJ's appearance and story are based on his own life. Whether Shagg stole military jets and worked for crooked government agents is at least somewhat questionable, but you can almost see where the appearance argument came from.

A court in California finally settled this case, ruling in Rockstar's favor: The company did not intentionally copy the appearance or life story of Michael 'Shagg' Washington. What makes the whole case a little more confusing is that Shagg was a contributor to the game's development. Rockstar interviewed him as well as others to get a feel for the topic, yet he felt his tale had been singled out.

The judge's final point is below:

"[The] plaintiff is relying entirely on CJ's physical appearance in the game, but that appearance is so generic that it necessarily includes hundreds of other black males,"