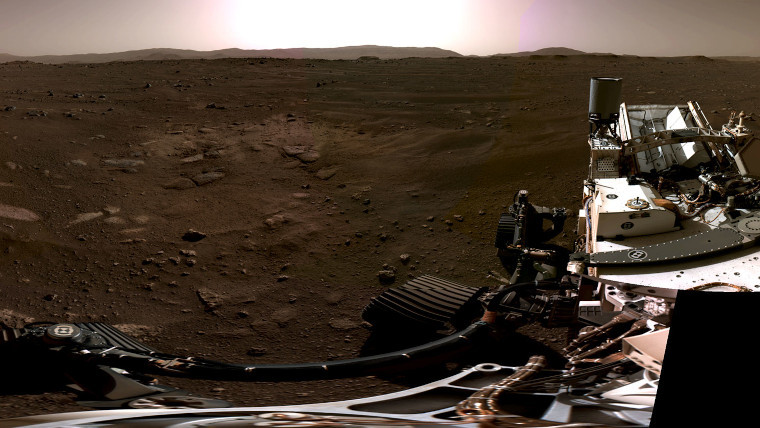 Just days after the successful landing of its Perseverance rover, NASA has released extraordinary footage of the landing sequence as well as audio from the surface of the planet where you can make out the sound of the wind blowing. High definition cameras that give a view above and below the rover, as well as the one looking from the vantage point of the sky crane, caught all the action beginning 11 kilometres from the surface to the rover’s landing.

Some of the highlights of the three-and-a-half-minute clip include seeing the Martian surface from a high altitude, seeing the dust on the surface come to life as the rover was close to landing, seeing the sky crane fly off after the rover had touched down and seeing the parachute unfurl. According to NASA, the parachute is also the most massive ever to be sent to another planet.

“For those who wonder how you land on Mars – or why it is so difficult – or how cool it would be to do so – you need look no further. Perseverance is just getting started, and already has provided some of the most iconic visuals in space exploration history. It reinforces the remarkable level of engineering and precision that is required to build and fly a vehicle to the Red Planet.”

To watch the descent, check out the embedded video below. To hear the audio from the rover, skip to 40:48 in this NASA event.

Since landing, NASA has been busy checking equipment on the rover to ensure there are no problems. Some of the instruments being checked this week include the Mars Environmental Dynamics Analyzer to look at the weather in the area and the Mastcam-Z which can take panoramic shots of the Jezero crater. The crater used to be a lakebed and contains rocks and sediment which the rover plans to collect up so that it can be examined to find out whether life ever existed on Mars.

Aside from searching for evidence of ancient life, the rover is also carrying the Mars Oxygen In-Situ Resource Utilization Experiment (MOXIE) which will try to produce oxygen. This part of the mission is key for future human-led missions to Mars where resources will be scarce and the ability to generate oxygen essential.