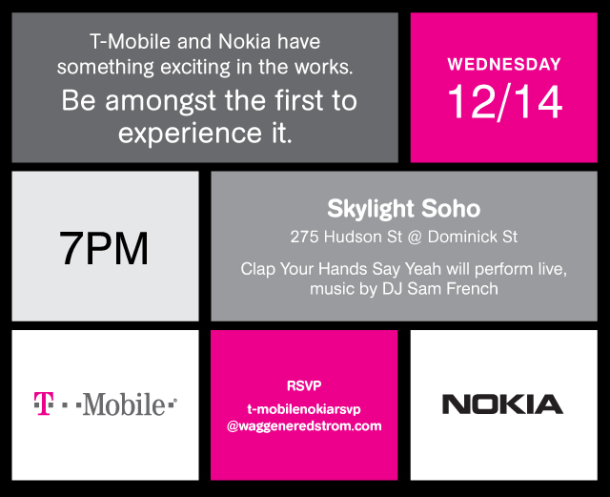 The wait for the US launch of Nokia's Lumia family of smartphones may be getting shorter than first announced. News.com reports that members of the media are getting invites to attend a press event in at the Skylight Soho event venue in New York City on the evening of Wednesday, December 14. The event will be a joint one between Nokia and wireless carrier T-Mobile. Officially, all the invite says is that the two companies have "something exciting in the works."

This press event is almost certainly set up to be the official introduction of Nokia's Lumia smartphone devices here in the US following the launch in parts of Europe in November. The smartphones are based on Microsoft's Windows Phone operating system although the Nokia/T-Mobile press event make no mention of Microsoft's involvement.

Microsoft has already held a big press event a month ago in New York City to promote Windows Phone, complete with a massive six story mock up of a generic Windows Phone device. At the time, the event was to promote the launch of the new phones from Samsung and HTC. However, it stands to reason that the launch of the Nokia Lumia smartphones in the US is likely to be the biggest introduction yet for Microsoft's mobile operating system which is still working to gain marketshare.