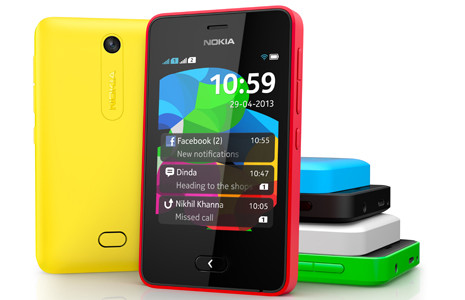 At an event in New Delhi, Nokia CEO, Stephen Elop just announced the low-end Nokia Asha 501. Acording to the CEO the design of this phone is inspired by Lumia and it's the first step in the next chapter of Asha.

The device is powered by a 1 Ghz processor and 512 MB of RAM. The new phone has a 3-inch 320x240 px touchscreen and it comes in six colors but the biggest selling point might be its battery. The Asha 501 has a reported battery life of 17 hours talk time and 48 days of standby time. The phone also has a removable battery as well as a 4GB MicroSD card inside.

Alongside the new phone Nokia is announcing the new Asha platform. It's software that makes using the phone a lot more intuitive. One of the biggest features here is the presence of Swipe. The same Swipe that has survived the N9, that allows you to go to your homescreen with one swipe from anywhere.

Another feature is "fast lane". This is a mix between a notification center and the main screen on a Windows Phone. Here you can see notifications, upcoming appointments, currently open apps and so on. The last mentioned feature is double-tapping the screen to wake up the phone, a feature which is expected to make its way to the Lumia line.

The Nokia Asha 501 will launch in June in over 90 countries. The phone will cost $99 unsubsidized.