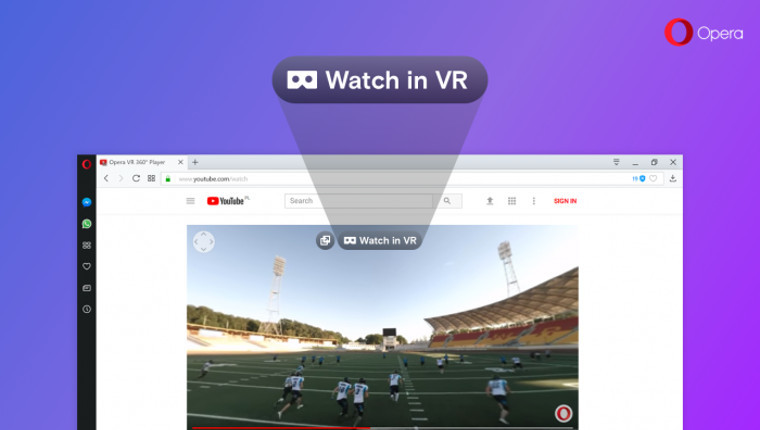 Opera has become the first web browser to support 360-degree videos on virtual reality headsets with its new developer update. The VR 360 player works with leading headsets such as the HTC Vive, Oculus Rift, and other OpenVR-compatible devices.

If you’re running the new developer build, the VR 360 player feature is enabled by default and automatically detects any installed VR headsets. When you watch a video, a button appears at the top next to Opera’s video pop out button. It is labelled "Watch in VR", and one click on it will initiate VR mode on the headset. Because you’re using a headset, there’s no need to pan around the video with the mouse and keyboard, just move your head.

While the feature is nice to have, the amount of 360-degree content online is still fairly scarce. Luckily, you’ll be able to watch 2D content too. In a blog post, Andrzej Czarnecki from Opera says:

“Opera’s new video playback will not only support 360-degree videos but standard photos as well. You can launch any of your favourite 2D movies or standard 180-degree videos through your headset, creating an awesome, personal movie theatre experience.”

It’s still early days for Opera’s 360-degree video player, therefore the company has stated that its player does not work with phone-based mobile virtual reality sets such as Google Cardboard just yet.