It's here. Apple's yearly update to Mac OS X. With more features, app redesigns and some very significant performance enhancements, this is the best version of OS X yet. But with Maps data still poor, and some neglected stock apps, does it give everything it promises? Here we will discuss the additions, and ask if they are really successful, and noticeable in day to day use.

Originally announced at WWDC, Apple's annual developer conference in June, OS X Mavericks was marketed as a significant upgrade for power users, providing additions to Finder such as Tabs and Tags. Suddenly managing files becomes faster and more efficient. I personally have tags set up as 'To Share' and 'Unfinished' which saves me considerable time usually spent searching for files. The fact that iCloud documents appear here means that the lack of a proper file system in the cloud is less of an issue than it used to be; previously users would have to launch a specific app to access a file for that app, and that app only; now users can explore all relevent files in a tag no matter if they are local or not.

Tags are colour coded, and appear as a small dot next to file names, throughout the system. Unfortunately, there are only seven colours to choose from, leading to some confusion for users who juggle hundereds of documents all for different purposes. I've also found it not to be as fast at indexing as I expected, even waiting for a few seconds for a file to appear in the right place can be jarring and confusing for a few seconds. Fortunately, excellent search integration into the already excellent search in Finder partly makes up for the slight downfalls in tagging speed. Tags are something you live without, but once you've tried them, couldn't imagine not having them. 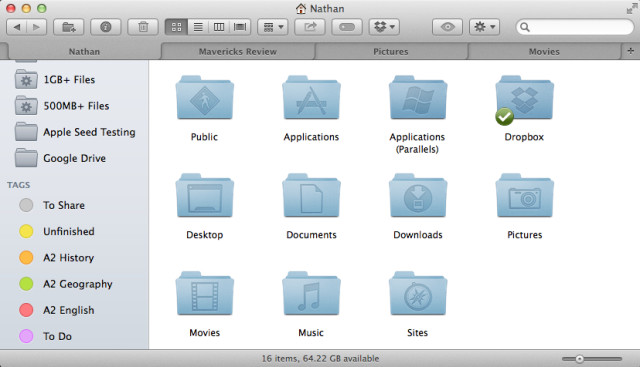 Finder Tabs also impress. Looking and working almost exactly the same to how they do in Safari, tabs reduce the amount of Windows needed, and keep your workspace far less cluttered. Dragging files from one tab to the other is fast, convenient and less finickity than the old method for moving files - drag to finder in the Dock, wait, then search for the windows when they are layed out as thumbnails. Then again, when using so many tabs, I find myself dragging the Finder window to a much larger size to accomodate them all, which wastes some screen space.

Apple greatly stressed performance enhancements in Mavericks, by listing and describing many of the advanced technologies they have added. Some may see this as marketing hype, but honesty, the difference is profound. Everything seems snappier, even on my 2009 iMac. I wasn't expecting much of a bump, but it really is impressive. 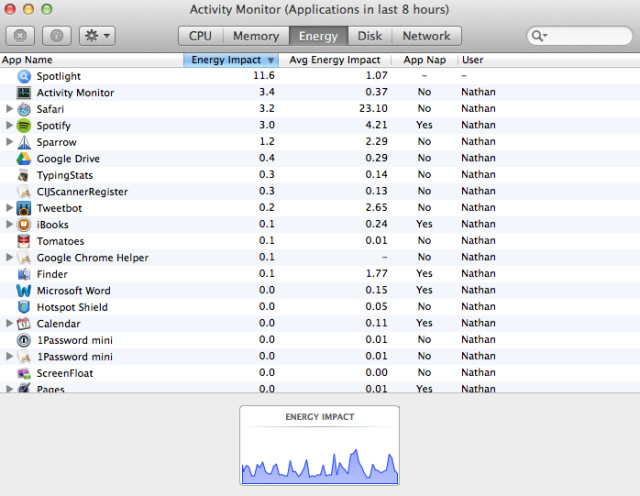 A new Energy tab in Activity monitor shows which apps are consuming more power, and which are using App Nap

One such notable feature is known as App Nap. 'If an app is hidden from view, then why should it use CPU?', Apple asked itself when developing this feature which slows apps down when they are behind other windows. App Nap is clever enough to detect if files are downloading or an important process is running, and App Nap won't initiate if this is the case. However, if you have a movie paused in Netflix, for example, which is using considerable CPU, once you cover it with a window, you'll have all that power to spare for the app you're currently using. The difference is not at all trivial, it is very obvious when it's working. You can check if an App is utilising this feature in a new Energy tab in Activity Monitor that graphs consumption. The battery saved with App Nap is significant, according to Apple, but we haven't had the chance to test this yet.

Apple have also built in features such as Timer Coalescing, which creates small periods of idol time in which the CPU drops into a low power mode to conserve battery, Safari PowerSaver to disable possibly unwanted flash elements until the user clicks them and Compressed Memory, to reduce the RAM footprint of inactive apps; Apple say this will make devices run 1.4x faster under load, and wake from standby 1.5x quicker. While it is not necessary to explain these in detail, from personal experience, they work together to make undeniable improvements all round. 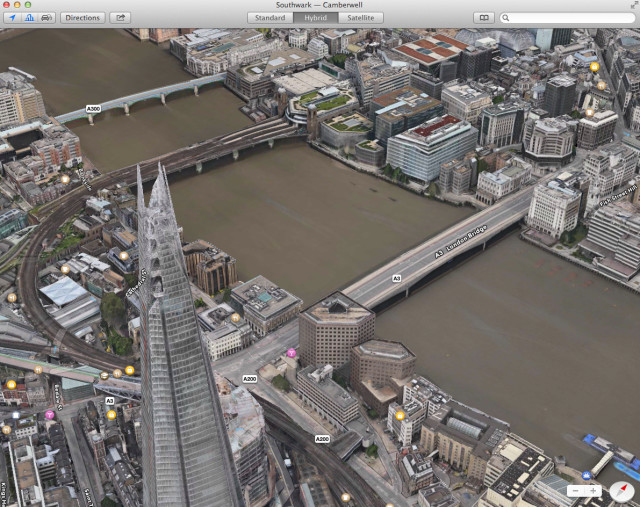 Two new apps have been carried over from iOS to OS X in Mavericks: Maps and iBooks. Unfortuntately, while a native maps app that can send directions to your phone could be helpful, (and that feature in particular is) data, at least in the UK, is still completely diabolical. I speak to many people who have no complaints with Maps, but even overseas, in the US there are problems. For example, searching for a large town or country doesn't always search for the biggest, closest or most relevent place, it will often take you somewhere that you obviously don't want to go. Addresses are wrong, phone numbers missing, websites muddled up. It's a disaster. Then again, Flyover, Apple's 3D arial maps are as stunning as ever, and far ahead of the competition; its usefulness, however, is virtually non existant. 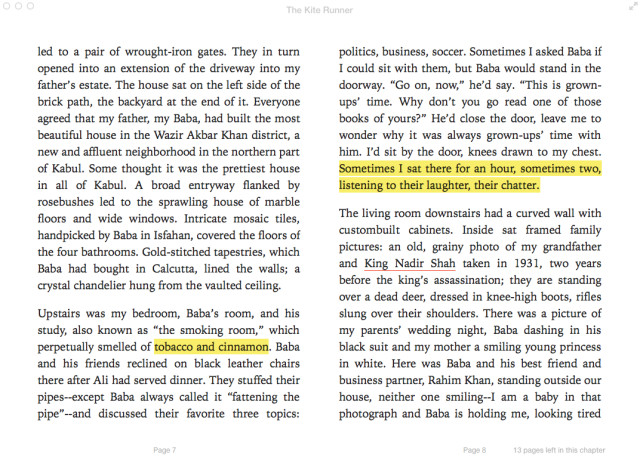 iBooks is a beautiful app, and performs impressively on Mavericks. At times it can be incredibly useful to have multiple books open at once - even textbooks can be open together for excellent studying. Then again, reading off a computer screen is not an ideal experience. Even so, iBooks shines in its syncing capabilities as annotations are mirrored over device. Kindle has had this capability for some time, but the polish which goes into the reading experience in iBooks is special. The UI can dissapear, leaving a floating page on the screen, or even filling the whole display with a full screen mode. It's super minimal, and extremely effective. 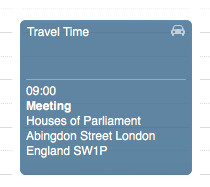 Around the system, Apple have introduced many more enhancements, and redesigns of existing apps. To start, the Calendar app has been stripped of it's faux-leather ornamentation, in exchange for a cleaner look reminiscent of its counterpart iOS 7 app. It works extremely well, and includes impressive features such as the ability to calculate travel time and incorporate it into a day's schedule. This integration with Maps is extremely useful here, and make the otherwise disappointing Maps app slightly more bearable. This feature is missing on iOS 7 however, leading to some confusion and un-Apple like inconsistency. 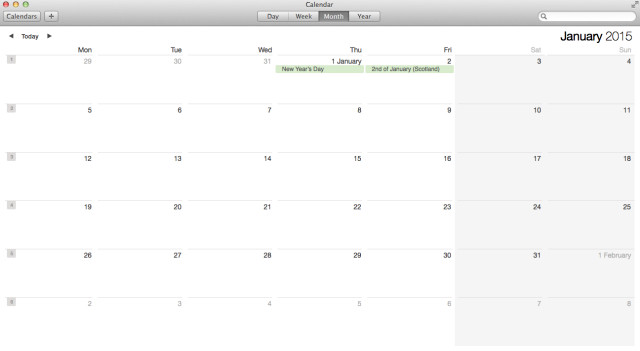 Next, improved notifications. Now, alerts are interactive, so users can reply to an iMessage from within the notification itself, something iOS still neglects to include. When waking your computer from sleep, Mavericks shows a list of missed notifications on the lock screen and websites can now also send updates. Finally, and thankfully, the linen textured background to the list has been replaced by a simple grey gradient. Nevertheless, while improved, it still lacks a way to clear all notifications which remains frustrating to most users.

iCloud Keychain is Apple's take on LastPass or 1Password. Essentially, it's a password and identity manager, which security stores all your login details on iCloud. From anywhere, you can log in and have forms auto filled. The way it seamlessly integrates between iOS and OS X is impressive, yet it is, predictably, not cross platform so anyone who owns an Android or Windows device could never commit. Where it does work though, it works very well indeed.

Improvements to multiple display support is a welcome feature, giving users the chance to have full screen apps running on different monitors with the ability to move them around. But this is more of a fix, than a feature. Since full screen apps were introduced in Mac OS X Lion, if someone put an app into full screen mode, all other monitors would show a full screen of that aforementioned linen texture; they would be entirely inoperable. Finally this isn't the case, and each screen can also have its own menu bar. A fantastic addition, but one that has been necessary for years.

Mavericks is, as a whole, a solid, fast, and feature packed OS. It's not necessarily a feature packed update, but every addition is a noticible one. The performance enhancements are by far the best tweaks Apple have made for some time. What there is to complain about isn't detrimental to using the OS as a whole, most of what is bad can be avoided most of the time. It does look like have been a little lazy in places, for example they didn't redesign the skeuomorphic Reminders app, despite overhauling Calendar, but we expect the bigger UI tweaks to come in the future.

But what's best? Mavericks is free. It's a mindless update, especially as you can jump to Mavericks from Snow Leopard for no cost whatsoever.  It keeps your Mac fresh and feeling new, and does virtually everything it promises. Grab it right now.

Author's Note: Mavericks was tested on a late-2009 iMac. This isn't the newest or fastest machine ever made, and while Mavericks did perform really well most of the time, I couldn't judge if any issues I did have are simply due to the age of the computer.