Last year, Steven Johns had a look at the original Oukitel K10000 and quite rightly pointed out that many smartphone users consider the battery life of their devices to be rather important. Unsurprisingly, that situation hasn't changed, with many people resorting to carrying portable batteries to keep their handsets charged when away from power sockets and wall warts.

While software optimizations can help, they can only take things so far before you need to consider whether or not to include a bigger battery in a device. Of course, doing so impacts the physical weight and dimensions of the handset, but that didn't deter Oukitel from shoehorning a monstrous 10,000mAh unit inside the K10000. Now, the company is back with a follow-up in the form of the aptly named K10000 Pro, featuring a number of upgrades.

The K10000 Pro packs a 5.5-inch 1080p IPS LCD, which is a step up from the standard K10000 handset from last year with its 720p display. With more pixels, the display would have some impact on overall battery life but, with a 10,000mAh battery, it would likely make minimal difference to most users in the long run. The screen is also protected by Corning Gorilla Glass, which seems to be commonplace with handsets of this size these days.

As far as picture quality is concerned, it is fairly acceptable, but nothing terribly fantastic. While I do retain a preference for an OLED display in a smartphone, LCD will likely remain the popular choice for many entry- and mid-level smartphones for several years to come. The only annoyance I came across was the somewhat binary nature of the backlight when it came to compensating for ambient light, where it would either dim itself or crank up to full brightness, but would never settle anywhere in between.

Short of coming in a rather mean shade of green, this phone is an absolute hulk of a handset and that's before you put it in the included transparent case. Part of that is due to the screen as well as the upper and lower bezels of the device, but is mostly attributed to the massive battery sealed inside the device.

However, rather than letting the phone become another black plastic slab, Oukitel has added a number of metallic accents to the device on either side, the front (adjacent to the earpiece and microphone), and the rear surrounding the camera, flash, and fingerprint sensor. I thought the brushed metal on the back of the phone was a bit much, let alone the four screws fastening this panel to the device. That said, it's not all bad, with an 'Australia calf leather' finish on the back providing sufficient grip for those that choose to minimize the added bulk of the case.

There's a power button and volume rocker on the right side of the phone, while the left side of the phone features an ejectable tray for the nano SIM cards and an optional microSD card. Unfortunately, should you choose to install a microSD card, you will have to sacrifice dual-SIM capability.

The remaining major call out as far as the body is concerned is the presence of dedicated navigation buttons below the screen. Oddly, these buttons lack illumination, making navigation in darker environment needlessly more challenging, albeit only by a small amount.

The K10000 Pro features a 13-megapixel sensor on the back with an f/1.8 aperture and LED flash while the front includes a 5-megapixel camera with an f/2.8 aperture. These are both a step up from the original model which could only manage those resolutions with the help of interpolation.

Like many handsets in this price range, the Pro's camera performance was at its best when in well-lit conditions. However, as light decreased, images quickly became grainy making the camera largely unsuitable for any sort of night shots. The camera also had a difficult time compensating for environments with high color saturation, with the result of noise being introduced into the shot.

There's also the inclusion of HDR as is expected these days which does help to add a little more depth to captured photos but you do need a steady pair of hands to ensure that you get the best possible result.

Certainly, compared to the latest iPhone or Galaxy S handsets, the K10000 Pro doesn't stack up and nor should it as that's not the key selling point of this phone. However, the camera is good enough for business users or road warriors who simply need a rudimentary camera for scanning receipts and other paperwork while out in the field.

While the K10000 Pro does not offer a stock Android experience, the added refinements to the interface appear to be cosmetic at best, with square and circular icon chrome being the main noticeable differences. The smartphone does ship with Android 7.0 Nougat and the unit I received also included the May security update for the mobile operating system.

One major drawback with this smartphone is its distinct lack of NFC, replaced by what looks to be a proprietary technology called 'HotKnot' which, in essence, allows two devices to send and receive data using the capacitive touchscreens. The screens of compatible devices need to be within a centimeter of each other for HotKnot to work but, unfortunately, the technology is not interoperable with other standards such as Bluetooth and NFC. This also means that for those who absolutely need NFC for tap-and-go payments will have to look elsewhere.

One may assume that given the huge battery in this smartphone the inclusion of a USB Type-C port would have been a given but, like the original K10000, the Pro makes do with micro-USB.

Included in the box is a wall charger capable of delivering up to 2A at 5, 7, 9, and 12V pegging the maximum power output at 24W which is absolutely necessary for this beast of a phone. In my testing, it took a bit over four hours to fully recharge the device's depleted battery. Of course, trying to charge off a standard USB port is a backup option but according to the estimated recharge times reported by Android, that would take upwards of 20 hours. If you have the time and patience then that's fine, but I would suspect that for many this will not be the case. 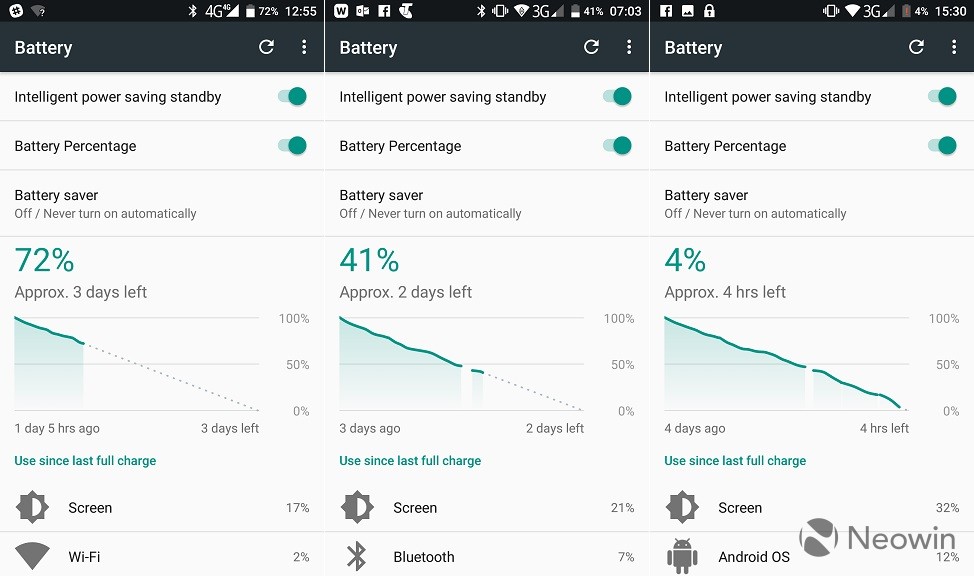 In my usage, the battery lasted a solid five days before shutting down. This was with Wi-Fi, Bluetooth, and a single SIM card in operation while also being paired to my Fitbit along with OneDrive photo backups being configured. This isn't too bad at all given that a few hours on the charger equates to days of use on the go, or even a week or more if your usage is more conservative.

However, one major drawback concerns the K10000 Pro's construction. Its micro-USB port is recessed further inside the device compared to many other smartphones, necessitating the use of the supplied cable. I lost count of how many other micro-USB cables I examined to see if any would be compatible but they were all simply too short to make a successful connection with the device. Of course, with a 10,000mAh battery, running out of juice is probably not going to be a sudden issue, but if you lose the cable finding a suitable replacement could be problematic. When you add the lack of wireless charging and the inability to swap out the battery the cable does end up becoming a single point of failure.

But, there is a redeeming feature in the form of being able to use the smartphone as a portable battery to recharge your other devices. However, similar to the issue mentioned about the charging cable, you can only use the supplied USB OTG adapter as it has the extended connector to make a successful connection.

MediaTek makes another appearance, this time in the form of its MTK6750T 64-bit octa-core CPU. It's not as snappy as the Helio P10 (MTK6755) found in the NOMU S30, which is clocked around 30% faster and, at least for a while, that's not a big problem at all. Despite the 3GB RAM, there can be the odd bit of perceptible lag here and there when waiting for a menu to scroll or an app to open. This can, for the most part, be fixed by forcing the device to clear out the app history but an extra 1GB RAM may have helped avoid such issues when multitasking. 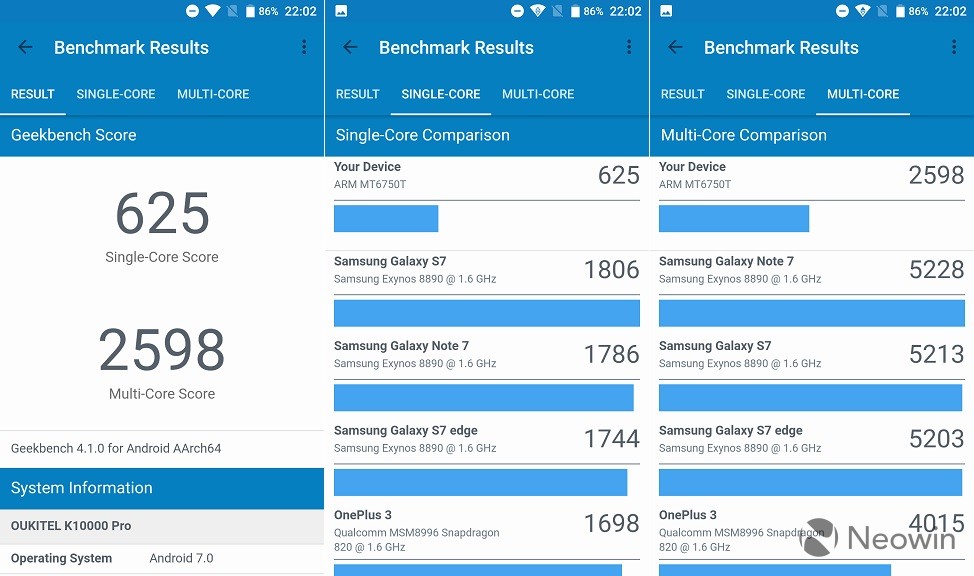 My typical daily usage involved using Facebook, Messenger, Instagram, Slack, Twitter, WhatsApp, Outlook, PowerPoint, and Excel, with some periodic usage of Audible, Netflix, and Spotify. I also had the smartphone paired via Bluetooth to my car for the purposes of audio playback and to take phone calls while on the road. 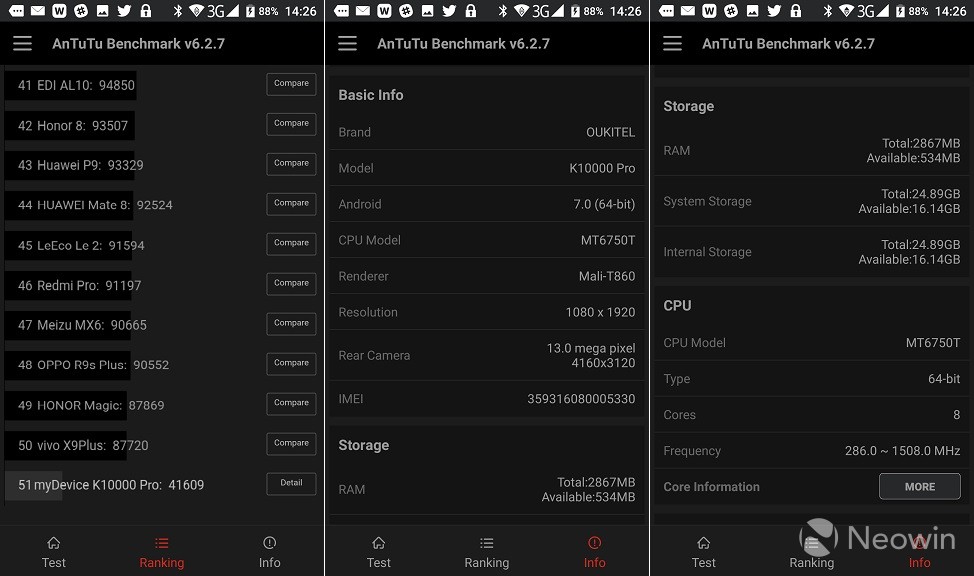 Also, for the sake of testing out 3D performance in games, I tried a number of titles including Asphalt 8: Airborne and Bullet Force. While the K10000 Pro's GPU provides an acceptable gaming experience, it was still evident that frames were being dropped just to keep up with the action. Nonetheless, games were still absolutely playable but if you're looking for 100% buttery smooth visuals then you should look elsewhere.

It's quite obvious that the main selling point of Oukitel's K10000 Pro is its battery capacity and, quite frankly, it delivers on that front. Without a doubt, I've not used any other smartphone that can last as long between charges without having to resort to activating power saving features or being ultra-conservative with usage. While its lack of water and dust resistance may not make it a great choice for extended or treacherous treks outside, the Pro's big battery and ability to charge other devices may well be appealing to that segment of the market.

The K10000 Pro is quite hefty though, tipping the scales at just under 300g and with dimensions exceeding those of smartphones from the beginning of last decade. It does redeem itself with its 5.5-inch screen but may still take some getting used to given that the Pro is roughly twice the weight of modern smartphones. Oukitel does at least try and make up for it, going for a classic black and brushed metal finish although the panel on the back seemed to call more attention to the device rather than making it understated.

Dual-SIM capability will be handy for those looking to do away with a second handset but any advantages, as far as doing away with extra bulk and weight, are quickly dashed or, at best, largely negated. However, users will be forced to make a choice between having two SIMs installed or making use of microSD storage and with the K10000 Pro providing 32GB of onboard storage, that will pose a problem for users who prefer to store media locally.

For $179.99, the Oukitel K10000 Pro does offer some nice upgrades over last year's model. While it is certainly an industry flagship as far as battery capacity is concerned, its collective specifications absolutely peg it as a mid-tier device that can deliver acceptable performance for many days away from a power source.

The review unit was kindly supplied by Oukitel and retails for $179.99 at GearBest.