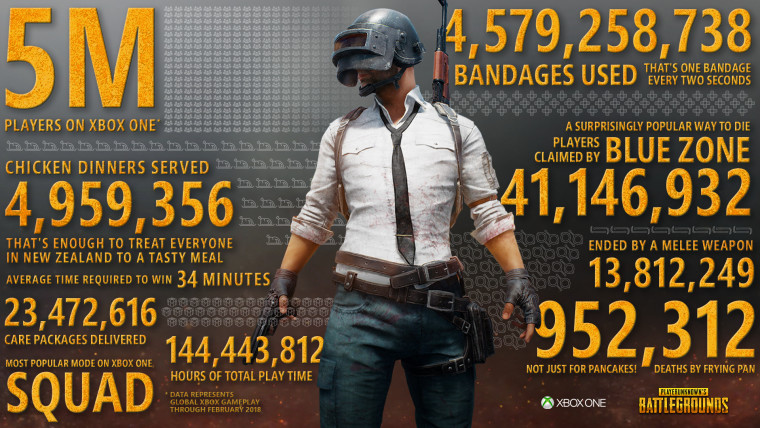 PlayerUnknown's Battlegrounds (PUBG) was one of the biggest success stories out of the video gaming industry in 2017. The game spent almost nine months in early access before releasing on PC; PUBG was announced for the Xbox One at E3 last year, with the title launching through the Xbox Game Preview program to the console in December last year.

Now, the game has achieved 5 million players on the Microsoft console. While the pace has somewhat slowed relative to the game's initial buzz, crossing the 5 million milestone in mere three months is still quite impressive. The numbers were, undoubtedly, helped by giving the game for free with an Xbox One X purchase.

Microsoft announced the milestone with a video feat﻿uring some of its community's moments in the game:

Microsoft has also announced a free PUBG5 jacket for all players who have purchased the game on the console and have activated a character as of March 22, 2018, at 12:01 AM PST.

Since its release, the title has been updated several times on the Xbox One to tackle many of the bugs faced by early adopters. According to the developer's roadmap, PUBG players on the console can look forward to the Miramar map, as well as achievements, more performance optimizations, game highlights, and more customizations in Spring 2018.