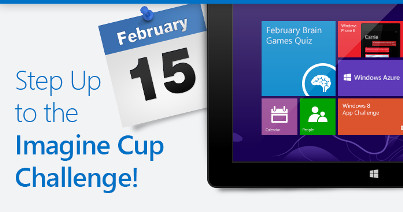 The 2013 edition of Microsoft's Imagine Cup student technology competition will be held later this year, but if interested students want to join in the festivities, they only have a brief time to complete the required challenge quizzes; the deadline for their completion is this Friday.

Originally, the deadline was supposed to be January 15th, but Microsoft changed the date to February 15th, due to the company recognizing that the Christmas 2012-New Years 2013 holiday season might offer some challenges of its own for students were were on vacation.

Just a reminder: All of the Imagine Cup 2013 teams must have at least one member pass Microsoft's challenge quiz for each of the competition's categories (Windows 8 Apps, Windows Azure and Windows Phone). The eligible teams will get a chance to win cash prizes of up to $10,000 as part of the competition.

The teams that are named as finalists for Imagine Cup 2013 will be flown to St. Petersburg, Russia, to compete in the 2013 worldwide finals from July 8–11. In addition to the three challenges, Imagine Cuo 2013 will hold competitions in three categories: Games, Innovation and World Citizenship. Microsoft has a total prize purse of $300,000 for this year's event.