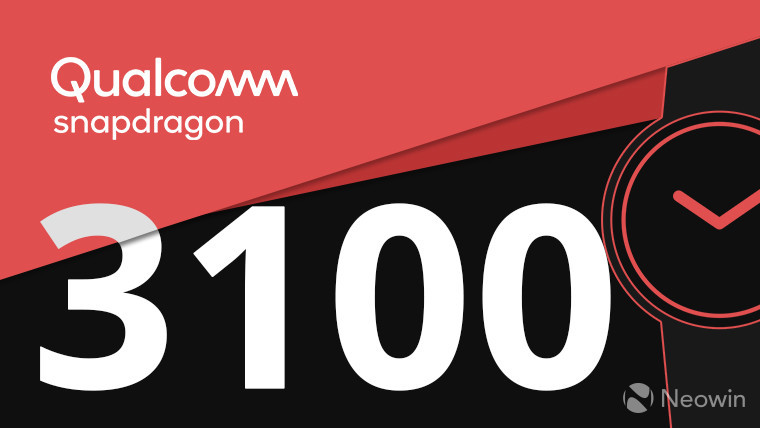 As it turns out, Qualcomm took so long to develop this chipset because it was making something completely new. Most smartphones use big.LITTLE architecture, with some powerful cores for tasks that require it, and efficient cores for tasks that don't need the additional power. This means that when your phone is asleep and syncing background notifications, it isn't sucking down battery life. The Snapdragon Wear 2100 didn't have this, with just four ARM Cortex-A7 cores clocked at 1.2GHz and an Adreno 304 GPU, similar to a Snapdragon 210.

For the Snapdragon Wear 3100, you can think of it like big.LITTLE, but littler (it's actually called Big-Small-Tiny), since it's being used for smartwatches. It's still got four Cortex-A7 cores, but that's combined with an efficient DSP and an ultra-low power co-processor called the QCC1110. It uses 20x lower power, and it's just 5.2x4mm.

The firm also included new NFC chips in the reference design, hoping that future smartwatches will ship with NFC. Some of the devices recently haven't used it.

Qualcomm also confirmed that the first three partners to use the new chipset will be Fossil Group, Louis Vuitton, and Montblanc.

"Qualcomm Technologies has played a critical role in the evolution of the smartwatch segment and our customers are currently shipping more than 100 Wear OS by Google smartwatches with 25 brands globally based on our existing platforms," said Anthony Murray, senior vice president and general manager, wearables, Qualcomm Technologies International, Ltd. "With the Snapdragon Wear 3100 Platform, we envisioned a new ultra-low power system architecture and in collaboration with the latest from the Wear OS by Google team, to help deliver a rich interactive mode, bring in new personalized experiences and support extended battery life for tomorrow’s smartwatches. We are delighted to announce Fossil Group, Louis Vuitton, and Montblanc as our first Snapdragon Wear 3100 customers."

This all adds up to much better battery life on your smartwatch, and Qualcomm called out some new features. The ambient display on Wear OS can now include up to 16 colors, live complications, adaptive brightness, and a smooth second hand. There's also a traditional watch mode that will give you up to 30 days of battery, or a week if you're already down to 20%, based on a 340mAh battery.

While both of those features will be available in the launch devices, there's another one that will come later. You'll be able to use constant GPS and heart rate for up to 15 hours, based on a 450mAh battery. This feature will show up in an upcoming smartwatch from an unannounced partner.