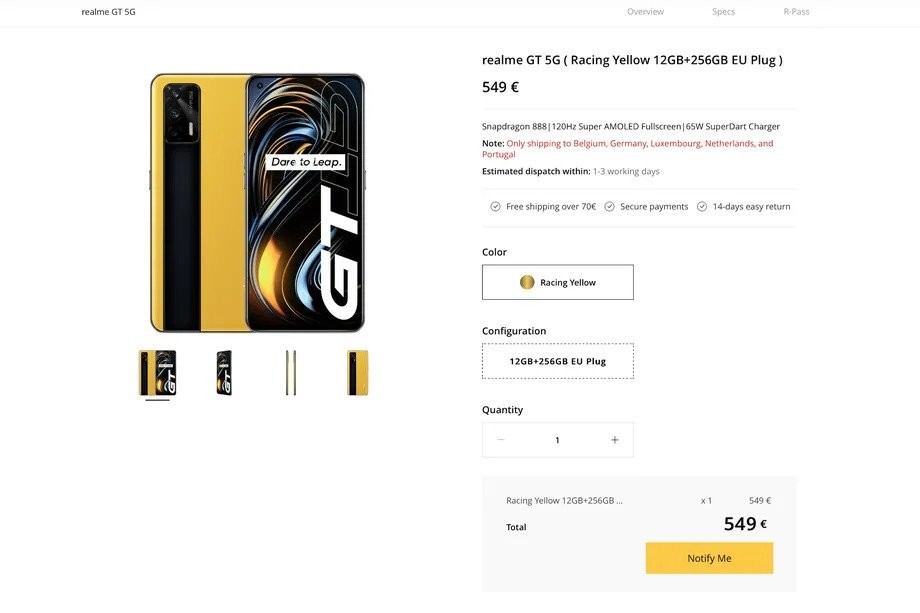 The Realme GT is Realme's flagship smartphone that is equipped with Snapdragon 888. Our readers in Europe may be pleased to know that it will be soon available in the region for €549 (~$670), packing 256GB of storage and 12GB of RAM.

Although Realme users cannot order the device right now, the company says that it will ship the smartphone to Portugal, the Netherlands, Luxembourg, Germany, and Belgium. The details about which other European markets this device will ship to once it has finally launched have not been revealed yet.

For those unaware, Realme announced the Chinese version of the flagship with the "entry-level" configuration featuring 8GB of RAM and 128GB of storage for 2,799 yuan, which is almost $440, back in March. This Chinese model comes with a 64-megapixel primary camera with a 2-megapixel macro and an 8-megapixel ultra-wide sensor. Other specifications for this device include a 4,500mAh battery with 65W fast charging and a 6.43-inch 120Hz OLED display.

Source and image via: The Verge