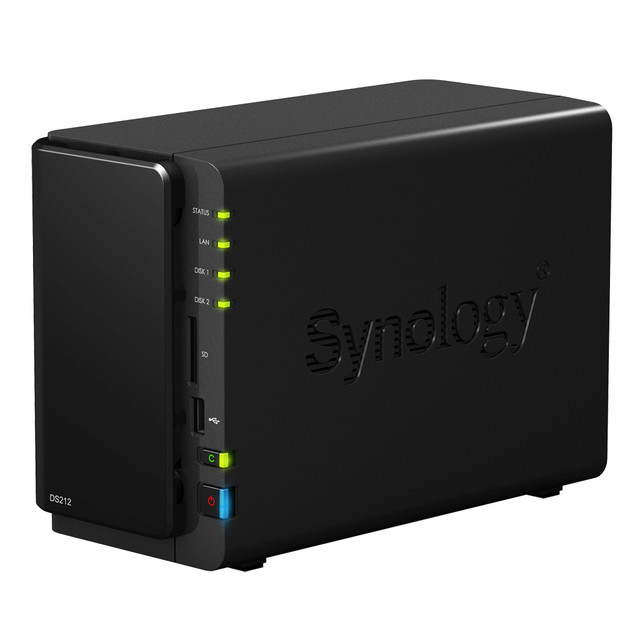 As digital media becomes mainstream, the ability to access this data from anywhere is becoming more critical and is something that users are constantly demanding. While there are many companies that offer cloud-based storage, the solution requires a constant connection to the Internet and streaming music and photos from the Internet to your personal PC can be a slow proposition. Even worse, nobody wants to be without their data if their ISP suffers an outage.

Because of this, more and more people have either home servers (such as Microsoft's Windows Home Server product), or simple network-attached storage (NAS) devices as the central hub in their home. This gives households the ability to stream photos and music to laptops, tablets, and gaming devices at speeds that are much faster than their ISP connection.

One of these NAS-based solutions is the Synology DiskStation DS411. The device bills itself as an, “affordable and full-featured network attached storage solution, specifically designed for small business and workgroup users who need to share and protect data cost-effectively, while increasing productivity with comprehensive office applications.” Although the DS411 does offer great storage capabilities, its range of features is actually much greater, including a built-in web server, MySQL database, IP camera control station, music streaming, backup service, and more.

When taking the server out of the box, you realize how small the device is. Its dimensions, in millimeters, are 184(H) x 168(W) x 230(D), which translates in inches to roughly 7 x 6.5 x 9. What this means is that the box can be tucked away in the corner and completely out of sight. It has two fans in the back that are extremely quiet and the only time you hear the device is when it's first powering up or when the drives are spinning up after inactivity. During our review, the DS411 was sitting only two feet from our desk and we never heard it. 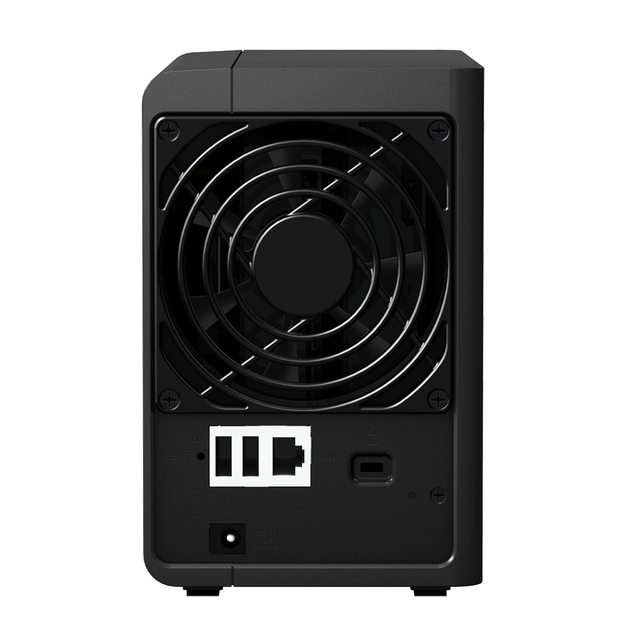 The back of the NAS server is very unassuming, having only a specialized power connector, a single Ethernet port, two USB ports, and an eSATA port. The front of the box has a power light (blue), a status light (green is good), a light that blinks with LAN activity, and a light that represents each of the up to four hard drives that the device supports. The device is headless and in fact has no video output at all. While some may be turned off by this, it's a common trend in the “server as an appliance” space and there are several Windows Home Server offerings that operate the same way.

After plugging in the power and connecting the device to the network (note: DHCP required for the initial install), you have to install software from the included CD onto your workstation. The tool, called the Synology Assistant, is a program that scans your network and finds all Synology devices that you have. The only other real feature of this tool is the ability to “Connect” to your device, which simply launches a browser and plugs in the IP address and port number of the DS411.

After logging into the subsequent webpage, you’re presented with a desktop with four icons – File Browser, Control Panel, DSM Help, and Quick Start. There’s a search bar in the upper right hand corner, and a down arrow in the upper right hand corner. This down arrow contains some of the advanced, but lesser used features like the initial setup of volumes, performance data, and the ability to install packages. The File Browser is used to view the file system that have been created and copy data to/from your PC. The Quick Start and Help contain useful information to learn about the DS411. The heart of the interface is the Control Panel, as this is where you not only setup user access and configure shared folders, but you also are able to manage what services you want your Synology DS411 to run. 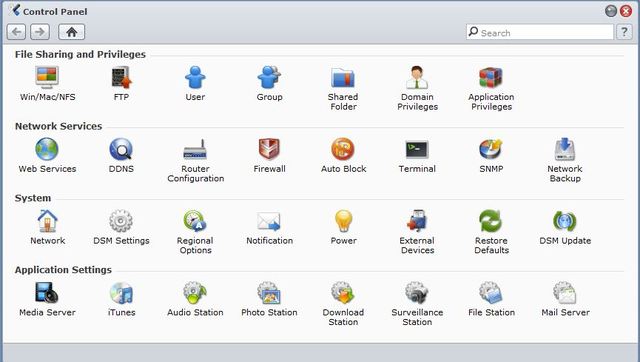 The first thing you’ll want to do is to create one or more volumes to share on your network. From the Storage Manager tool, click the “create” button and follow an easy to use wizard. The process asks you to select the disks to use in the volume, what type of data protection you want (RAID-1, RAID-5, etc), and whether you want to check the drives for bad blocks. The process can take quite awhile (hours for a four disk, RAID-5 configuration if you check for bad blocks), but it's a one-time process. 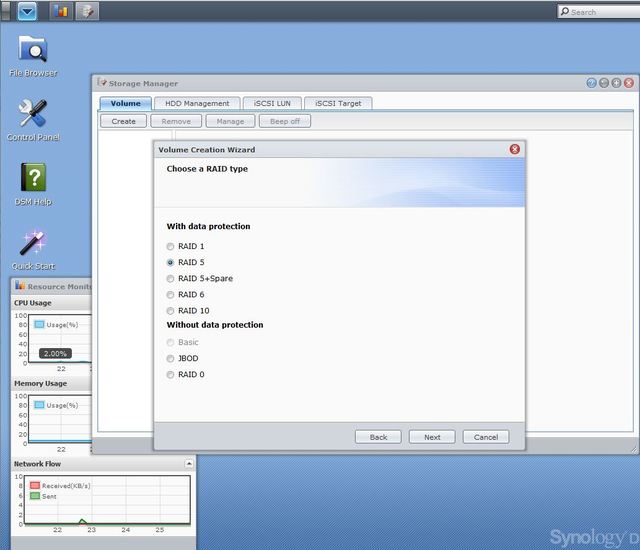 Screenshot of the the desktop and setting up a new volume

Once the volume is created, you create folders to be shared on your network. You can make whatever folders you want, but for most people the first step will probably be to go to the “Media Server” option in the control panel and turn on DLNA/UPnP to allow streaming of music, videos, and photos across your network. Doing this will automatically create three volumes for you: music, photo, and video. After creating the volume and copying some MP3s into the music folder I was immediately able to listen to the tunes on both the Xbox 360 and the Playstation 3. The Media Server even has a handy option to automatically transcode FLAC/APE, AAC, OGG, and AIFF files if your receiving host can’t play them natively. Along the same lines, the DS411 also gives users the ability to play music from the server via iTunes.

Although a lot of NAS devices stop here, the Synology DS411 has many more features of note. One of the most interesting is the “Download Station,” a self-contained BitTorrent client that can automatically start downloading files off of the Internet for you and store them in a folder on the NAS server. Simply type in a search phrase in the box and the client looks online for the requested files, allowing you to download whatever you want. Keep in mind that there is a warning that states, “Users must comply with all applicable laws and regulations when using this download service.” 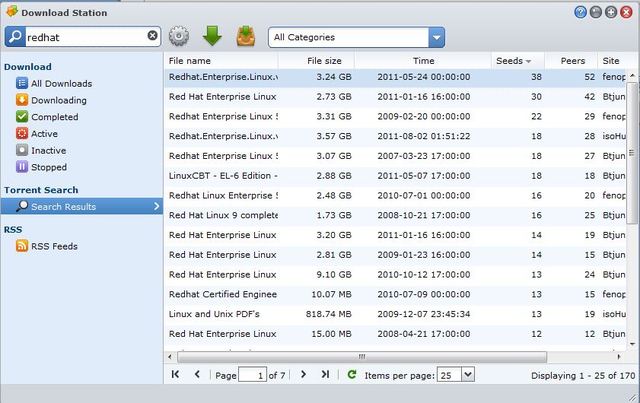 Not only will the DS411 allow you to access your files from within your home, but it also has the ability to let you access your files from anywhere on the Internet by means of its “File Station” tool. Along the same lines, Synology includes an “EZ-Internet Wizard” that makes the setup easier for people who are little less technology savvy. The wizard is helpful in that it not only works to setup the proper port forwarding (automatically if you have a supported router) but it also automatically configures the devices firewall to block ports to services that you don’t want available if you connect the device directly to the Internet.

Some other notable features are the ability to FTP, telnet, and SSH to the device, in addition to running your own Apache webserver complete with MySQL, PHP, and WebDAV support. It also has the ability to monitor IP-based security cameras, which users can view from the console or from downloadable iPhone and Android apps. Unfortunately we didn’t have a camera available to test at this time.

The device will also act as a capable backup server, giving users a couple of different options to backup their files. One option allows the DS411 to connect to another Synology device and automatically copy files between the two DiskStations. Another option allows users to use the basic rsync capabilities to copy files to the DS411. One downside to the DS411 vs. a Windows Homer Server installation is the fact that there’s no bare metal restore of Windows boxes. Although all of your data will be available once you rebuild your workstation, the actual act of installing and configuring your broken machine is your responsibility. With WHS, you can restore your system to the state of the last backup within minutes.

The only other negative we found in our testing is that replacing a drive requires shutting down the server, removing thumbscrews, and taking off part of the case. It would’ve been nice to have some sort of drive bays in the device in order to simplify the management, even if this would've increased the overall size of the box.

In case all of these features aren’t enough, Synology allows users to install other non-standard packages onto the device. They maintain a list of applications on their site that include tools to improve backups, add syslog server functionality, or turn the DiskStation into a VPN server. In addition, it also supports the popular Squeezebox Server application. There are also apps available for your iOS and Android devices that allow you to manage the appliance, play media, and manage downloads, all at no extra cost.

If you're interested in the device, Synology gives potential customers the chance to try the software out before purchasing. They host a website that allows people to login and play around with the interface in a non-destructive setting.

Although we didn't have a lot of time to formally test the performance of the DS411, we did some real-world comparisons between it and a homebuilt Windows Home Server running with Drive Extender. Using a single host, we were able to copy a ten gigabyte file from an SSD drive on our workstation, over a gigabit network to both the WHS box and the Synology appliance in roughly the same amount of time. This tells us that the limiting factors for performance are the source drives and network bandwidth. For most people, this is probably all that's needed, but further testing could be done in a workgroup setting to see how well the solution scales.

Performance of the UI is good although there were occasionally some slight delays, especially when the system was creating the RAID-5 volume. This was nothing that would detract from normal use.

After playing with the device for a week, we feel like we haven’t even started to scratch the surface of what this device can do. If you’re looking for a basic device to share files within your home, this may be overkill. However if you want a full-fledged server that is as easy to use as an appliance, the Synology DS411 DiskStation fits the bill. The device is a little expensive at roughly $525 without drives, but is definitely worthy of being the central media server for your home.