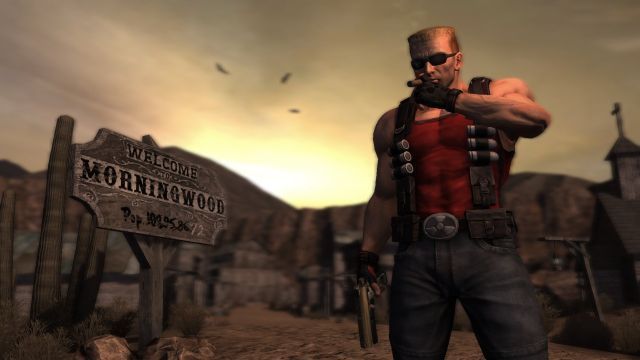 On Friday gamers saw history being made as a playable two level demo of Duke Nukem Forever was released for people who pre-order the long awaited first person shooter. The full game comes out on June 14 (June 10 in other parts of the world) but now the demo has apparently yielded some info about future DLC expansion packs for the Gearbox Software game.

The web site Egamer.co.nz reports that someone supposedly found a list of three DLC packs in the demo's file. Obviously this list might be considered to be something of a spoiler so if you don't want to know anything more, stop reading right now. It's also more than possible that what was listed in the demo file could be changed.

One of the DLC  packs will add four new weapons to the game including a sticky grenade, a mini-gun and a "BFG". The BFG is, of course, the big weapon found in id Software's Doom series but it's unknown what the name might mean in Duke Nukem's universe. The second DLC listed shows three new multiplayer maps, including one called "EDFBase". The full game ships with 10 multiplayer maps and four multiplayer modes.

The third DLC pack is perhaps the most interesting. The list shows that it will include a whopping 15 single player map which is more like a more traditional expansion pack than a downloadable map pack. It also adds a new weapon, the "impregnader". Finally the list mentions things like "bus", "armwrestling" and "karaoke machine." Again things listed in the file could be changed by Gearbox. The developer has already confirmed that First Access owners will get Duke Nukem Forever's first DLC pack for free when it is released.