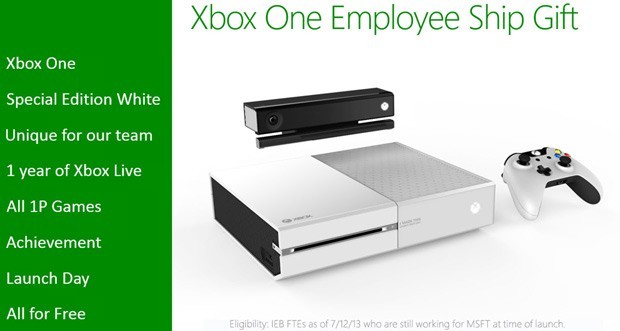 While most folks are waiting patiently for the launch of the brand new Xbox One, Microsoft has gone ahead and made its employees an offer they can’t refuse. Following its tradition of gifting their own devices to the folks that help build them, the company is supposedly giving away a special edition of the Xbox One to the full-timers in its Interactive Entertainment Business.

This special edition Xbox will reportedly feature a white and silver casing with controller, which, many folks would argue, looks even better than the “liquid black” of the retail version of the device. Eligible employees will also receive a year of Xbox Live and all first party games for free.

Of course, this isn’t the first time we’ve seen the white Xbox One. A leaked developer kit showed up  last month looking somewhat similar to the one in this image. And we can’t confirm just yet if this rumor is true, but if it is, some Microsoft employees will be very happy come November.