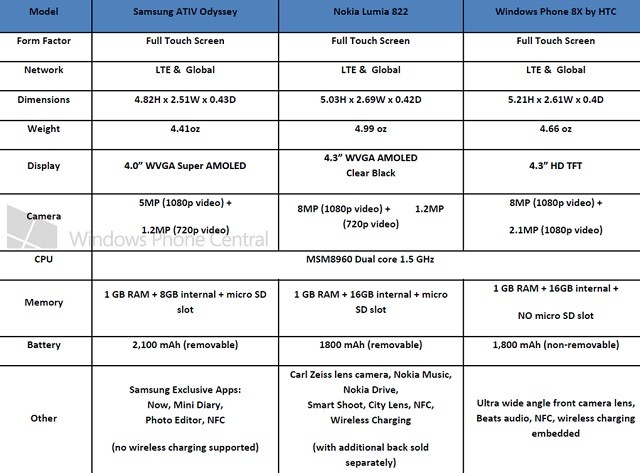 According to new info from WPCentral, Verizon's third Windows Phone 8 device – the Samsung ATIV Odyssey – won't be a high-end device like the ATIV S, but will instead be mid-range. Leaked specifications indicate the device has a 4.0-inch WVGA display and a 5-megapixel camera, but the same Qualcomm MSM8960 dual-core chipset and 1 GB of RAM as seen in other devices such as the HTC 8X.

Other interesting specs include a 2,200 mAh user removable battery, 8 GB of internal storage plus a microSD card slot, and a thickness of 10.9mm. These sort of specs put it on the same page as the Nokia Lumia 822, rather than the making it a high-end device like some people were hoping.  Then again, the last time we saw the ATIV Odyssey was in a leaked photo, and it certainly didn't look like a high-end device back then.

Chances are the ATIV Odyssey will be shown off at CES 2013, which starts next week, so expect a confirmation of the above specs shortly.