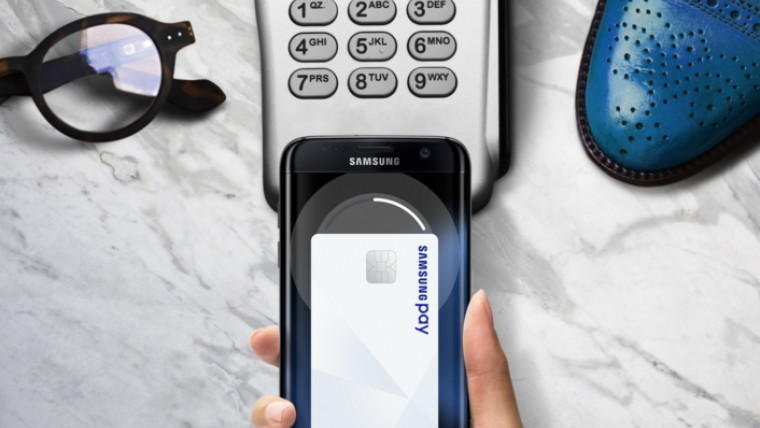 As was suggested by reports earlier this month, Samsung Pay is finally available in the UK. It works with the Galaxy S6, S7, and S8 family of devices at launch, but support for the Galaxy A series and Samsung’s Gear smartwatches is planned “in the coming months”.

Apple Pay launched in the UK two years ago, so it’s clearly been a long wait – yet, there are some unfortunate and peculiar omissions.

With the launch in the UK, Samsung Pay works with cards issued by VISA and MasterCard, but only by three banks: MBNA, Nationwide, and Santander. Samsung says that more banks like HSBC, First Direct, M&S Bank, and American Express will be joining that list “soon”.

That’s not it though: Samsung Pay in the UK does not support Magnetic Secure Transmission – or MST. It’s strange because Samsung does support MST in other markets; alas, thanks to the omission, Samsung Pay might not work with some older payment terminals that don’t support NFC.

Speaking with The Independent, Kyle Brown, Samsung’s Head of Technology for UK and Ireland elaborated:

The UK market is very much trending towards NFC, which is why we’re focusing on that for Samsung Pay. Right now, we’re looking at whether we can use MST for loyalty cards or something like that in the future.

Samsung has also partnered with Transport for London (TfL) to enable Samsung Pay on all of its services as well as the national rail services in London.

Samsung’s devices will act just like an Oyster card and allow commuters to pay for their journey by tapping the phone against the card reader. However, TfL does highlight some important things to consider.

If one uses their Samsung device to begin a journey, and then run out of battery, they won’t be able to end the journey, and thus be charged a maximum fare as a result. Additionally, if the battery runs out and an inspector asks you to touch the phone on the reader, you could be liable for a penalty of up to £1,000 – a hefty price for little convenience. It’s also not possible to use a different payment method to check out once you have checked in with Samsung Pay.

Initially launched in South Korea back in 2015, Samsung Pay has seen its fair share of expansions worldwide, but only delays in the UK – it was coming “very soon” early last year but was eventually delayed to 2017 in November. Its eventual arrival may prove useful for users in the country, but the limitations may still be a sore point.

Source: The Independent, Transport for London via Engadget