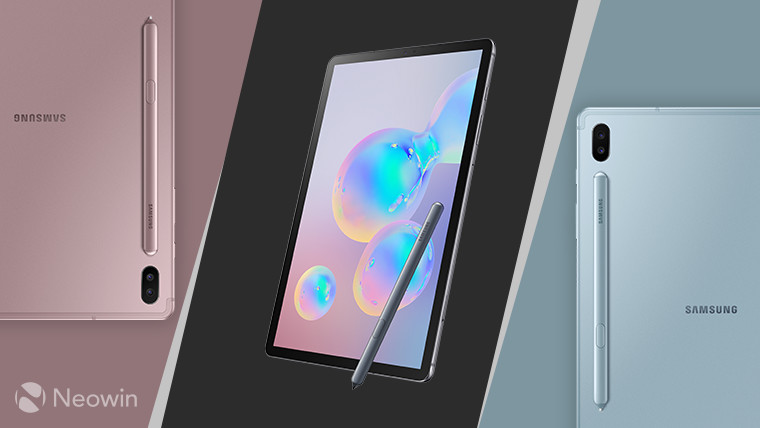 After teasing both a Galaxy Tab and a Galaxy Watch reveal for today and August 5, respectively, Samsung has taken the wraps off of the first device, the Galaxy Tab S6.

The new iteration is positioned as a tablet which "enhances your creativity", owing to its redesigned S Pen - which now has wireless charging and up to 10 hours of battery life -, with remote control functionality. The pen can also take advantage of something dubbed S Pen Air actions, which are essentially gestures that allow users to take selfies, videos, control multimedia content, and more.

In addition to the S Pen, the Tab S6 also features four speakers, with the sound system provided by AKG and featuring Dolby Atmos. Furthermore, an enhanced Samsung DeX is also included, a function which has a dedicated key on the Tab S6's new Book Cover Keyboard - which features an S Pen holder, free angle stand, touch pad, and function keys.

And of course, here are the Galaxy Tab S6's more detailed specifications:

Besides all of the above, the Tab S6 comes with Samsung Knox - the South Korean giant's security system -, and has a feature which should be familiar to users of older Windows Phones: double tap to wake.

The firm was also keen to point out the device's gaming capabilities, touting its Game Booster feature, AI-enhanced gameplay, and partnership with gaming-focused chat client Discord, the latter of which will be available at the end of August.

The 6GB RAM / 128GB storage variant will set folks back $649, while the 8GB RAM / 256GB storage tier will come in at $729. You'll be able to pre-order the tablet beginning on August 23, and it will be available on September 6. The 4G LTE model will be available later this year. If you buy it before September 22, you'll get the Book Cover Keyboard for 50% off.