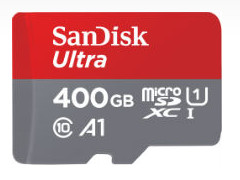 As part of its announcement at IFA Berlin, Western Digital debuted its largest microSD card yet with its 400GB SanDisk Ultra microSDXC UHS-I card. The firm touts this as "the world’s highest-capacity microSD card for use in mobile devices".

According to the firm, it has been two years since it introduced the world to its 200GB microSD card. Since that time, a lot has changed, and some will require the extra storage afforded by SanDisk's latest card. Western Digital is able to achieve this capacity by "leveraging its proprietary memory technology". This is coupled with its "own design and production processes that allow for more bits per die".

But size isn't everything when it comes to a card, and it still requires the ability to read and write data at a relatively quick rate. The card boasts transfer speeds of up to 100MB/s which is the equivalent of copying 1,200 photos per minute. The card also meets the A1 App Performance Class specification, which means that apps installed to the card will load faster.

As far as pricing goes, the 400GB card will be available for a manufacturer’s suggested retail price of $249.99. The card can be found on the Western Digital's website and at other major retailers in the United States.