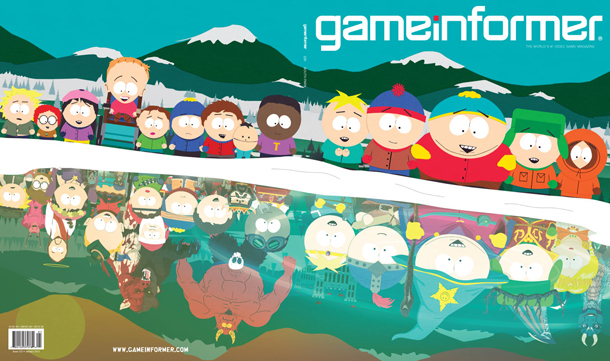 South Park will once again try to become a major gaming franchise, this time as a full scale role playing game from developer Obsidian Entertainment. Game Informer's web site has the first word on this new game based on the long running animated TV series featuring Stan, Kyle, Kenny, Butters and Cartman. The game will be the cover story, shown above, for the January 2012 dated issue of Game Informer's print magazine.

Details of the game have yet to be revealed with today's story saying only that it will  be "up to you to make friends and defend the town from a wide range of threats." South Park creators Trey Parker and Matt Stone will write the script for the game and oversee its development with Obsidian, which created Fallout New Vegas in 2010 and most recently Dungeon Siege III in 2011.

THQ will publish the game sometime in 2012 for the PS3 and Xbox 360 consoles (no word if there will be a PC port as well). Some of you may remember that the now defunct publisher Acclaim released a number of South Park titles in the late 1990s-early 2000s for consoles and the PC to generally poor reviews and sales.