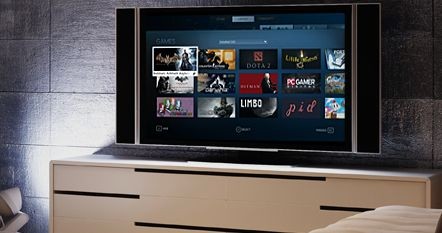 In September, Valve launched the open beta of the Big Picture mode for its Steam PC game download service. Today, Valve announced that the final version of Big Picture is now available for all Steam owners to access.

This new way of using Steam has been designed to work best on larger screens than the normal PC monitors. It's also been created to work best with a gamepad controller, although it can still be used by a normal keyboard and mouse setup. It also includes Valve's own Internet web browser which can be accessed even while a person is playing a game on Steam.

In order to celebrate the official launch of Big Picture mode on Steam, Valve has also started a new sale of what they consider to be a selection of "controller friendly" games on the service. Titles such as Valve's own Portal 2 and Counter-Strike: Global Offensive, along with other games like Limbo, Deadlight, Castle Crashers and more, have had their price cut by between 50 to 75 percent from now until December 10th.

Many people believe that bringing an easier way to access PC games on Steam via a large screen represents Valve's push to compete more directly with game console companies such as Sony, Microsoft and Nintendo.