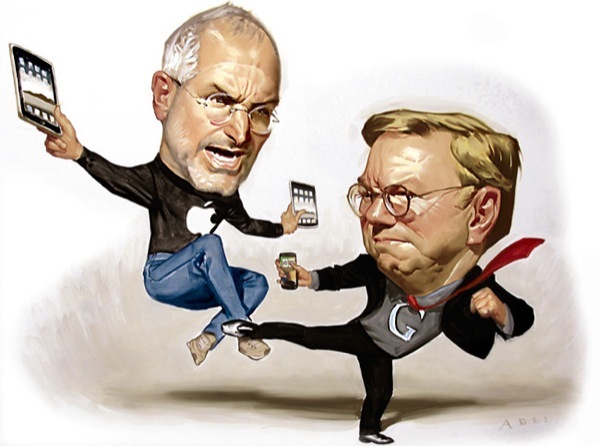 The New York Times has run a piece that details out the long history between Apple and Google. Up until a few years ago, Apple and Google were inseparable and Google’s products where the shinning star on the iPhone (maps and search) but as of late, they cant even look each other in the eye.

Over the past few years Google has crossed Apple and its becoming quite clear that Steve Jobs is not happy about the situation.  Google, according to Steve Jobs, has encroached in to many areas that Apple now competes, namely the Android OS.

When Steve Jobs caught wind that Google would be creating Android for the mobile platform, he did not want them to include multi-touch.  By doing so, Steve said that he would sue Google, and thus, we have the Apple vs HTC lawsuit.

Steve Jobs has also flung the proverbial poo at Google too, at a recent meeting Steve called the ‘Don’t be Evil’ motto of Google as “bullshit”.  And, as reported by CNBC, many have said that “Steve Jobs simply hates Eric Schmidt”.

So what does this all come down too?  It shows the Google is getting bigger by the day, Steve fears that Google actually has the brand image to severely hurt Apple, and that Microsoft, for the time being, is out of the cross hairs of Apple.

Will we ever see the end of the feud that will allow Apple to become good friends with Google again?  Probably not, with a browser, an OS platform, a mobile OS platform, mobile advertising, and a few other areas that cross Apple’s path, the two are more enemies than friends.