Microsoft may not be talking about how many of its Surface tablets it has shipped or sold since the Surface RT launched in late October. However, a report claims that three million Windows-based tablets shipped worldwide in the first quarter of 2013. 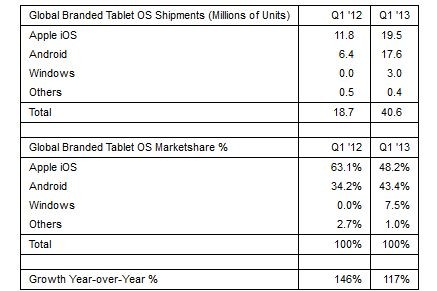 The numbers come from research firm Strategy Analytics, which added that the market share of Windows-based tablets was at 7.5 percent for the quarter. However, the report added, "Very limited distribution, a shortage of top tier apps, and confusion in the market, are all holding back shipments." It's unclear exactly what the report classifies as a 'Windows tablet', given the various hybrid and convertible form factors now available with touchscreens.

Apple stated earlier this week that it shipped 19.5 million iPad units during the first quarter of this year. Strategy Analytics said those numbers were enough for Apple to capture 48.2 percent of the tablet market during the quarter, but that percentage is down compared to 63.1 percent from the same period a year before.

The firm claimed that there were 17.6 million Android-based tablets shipped during the quarter, which enabled it to claim 43.4 percent of the total market. However, the report added:

When we add White-Box tablets into the mix, Android market share of the total tablet market increases significantly to 52% and iOS slips to 41%, as the bulk of the White-Box tablets are Android low budget models aimed at a different market to the branded tablet.

Overall tablet shipments reached a record high of 40.6 million units, a 117 percent increase worldwide in the first quarter of this year, versus growth of 143 percent for the same period a year ago.