Yesterday Notch, the creator of popular indie game Minecraft, slammed Microsoft again for Windows 8, saying he wouldn't certify the app for Windows 8 and mentioned he hopes consumers won't adopt the operating system. Bring in Rafael Rivera, a "guy that knows -a lot- about Windows", who was understandably sick of developers claiming that Windows 8 is a walled garden, and that certifying apps for Windows 8 "ruins the PC as an open platform".

As Rivera explains on his blog Within Windows, Microsoft was not asking Mojang (Notch's company that makes Minecraft) to turn his popular game into a Windows Store App - namely, an app that runs in the Modern UI of Windows 8 and can only be distributed by the Windows Store. Instead, they were offering to help push Minecraft through the Desktop App Certification process, which does not restrict the app to just the Windows Store.

The idea of the Desktop App Certification process is to ensure the app adheres to some basic best practices for Windows apps. Rivera ran Minecraft through a mock certification test, and found that it passed with warnings; he also discovered that these warnings can be rectified in a few simple steps. 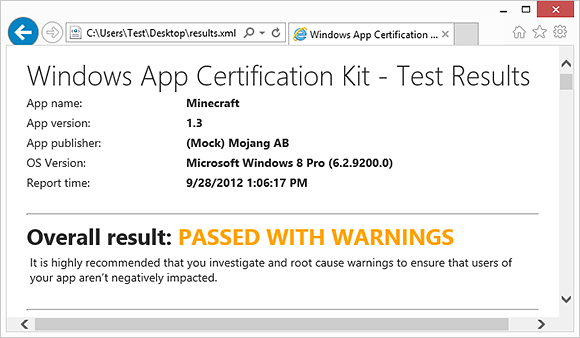 To make it even more embarrassing for Notch, Rivera says he made some tweaks that took just four hours and Minecraft passed certification.

I took Minecraft, made some tweaks, and PASSED app certification. Took me about 4 hours to do. cc: @notch

This means that in no time at all, Mojang and Notch could easily certify Minecraft, allowing him to submit it to the Windows Store which has huge worldwide exposure. He doesn't have to submit the app, and he's not forced to turn Minecraft into a Windows Store-only application, but it makes the desktop Minecraft app a better, more secure program in the end.

So in the end, certifying Minecraft for Windows 8 will not force the game into a walled garden, and it won't "ruin the PC as an open platform"; and also by not certifying the app it will still work on Windows 8. Microsoft was just trying to help, and Notch decided to go and slam Windows 8 rather than spend a few hours improving his own app.