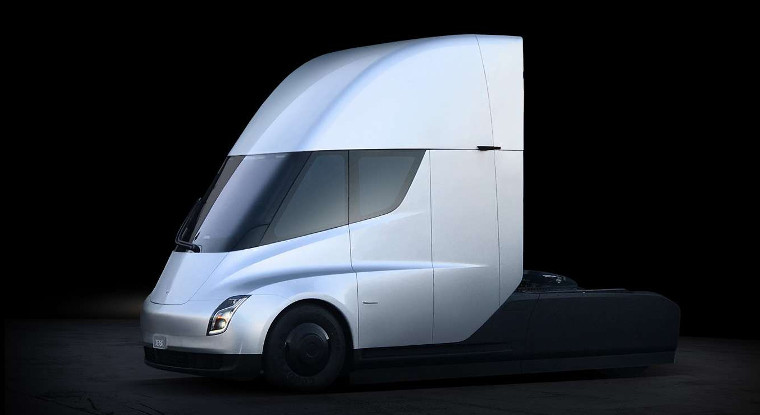 Tesla has finally unveiled its electric truck at an event in California. During the event, Elon Musk went through many of the details and specifications of the truck, but at the end, Elon Musk also showed off the company's plans for a new roadster that will come out at some point in 2020.

Production for the Tesla Semi truck begins in 2019 and, if one accepts all that Elon has to say about his trucks, they far outstrip the capabilities of current diesel trucks in almost every way.

Firstly in terms of raw acceleration, the Tesla Semi can go from 0-60 mph in 5 seconds, which might even beat some people's cars, a diesel truck, on the other hand, can currently only manage 0-60 mph in 15 seconds.

This is achieved through four independent electric motors attached to each of the wheels on the rear axles, this arrangement also means that there is no transmission in the truck. Which for truck drivers currently dealing with around 10 gears will mean an experience where they never have to shift much more than once ever again.

In terms of acceleration with a payload, the Semi can accelerate from 0-60 mph in 20 seconds with a full payload of 80,000 lbs, the most legally allowed on a US highway. Musk did not define how long this would take in a diesel truck but it appeared to be much slower. If the electric truck has to climb a hill with a full payload it can achieve a 65 mph speed up a 5% gradient which, again, beats the current capabilities of a diesel truck which can only achieve 45 mph on the same slope.

But let us get down to the real business of trucking, distances. The Tesla Semi can cover a range of 500 miles on a single charge, with the maximum legal payload, and traveling at highway speeds. According to Musk 80% of trucking routes are less than 250 miles, which means the truck can go to the destination and back home all on a single charge. But, even if the truck needs to make a stop to recharge on longer journeys it can achieve a 400-mile recharge in 30 minutes. Which means a driver might even be able to factor this recharge into their natural rest stops.

However, the actual stations that these trucks need to make a recharge at are something that the entire dream hinges on. Musk insists that the "Tesla mega charge network" will be massive and worldwide. These stations will offer guaranteed recharge rates because they will be solar powered and incorporate the Tesla power pack. The truck will run on sunlight, and Musk says because the supercharge network that the current Tesla cars rely on have sprung up everywhere, the same will happen for these trucks.

Amazingly, Musk claims that Tesla's truck has a better drag coefficient than a Bugatti Cheyron, a $2 million supercar; apparently, the drag coefficient of the truck is 0.36 whereas the Bugatti is 0.38, a normal diesel truck is up somewhere at around 0.65 to.70. The Tesla Semi achieves this coefficient by having a bullet-shaped nose, a flat bottom, but also because the truck has side flaps which detect and adjust to fit the profile of the trailer. Which assumedly means that the flat upright front side of the trailer is never directly in the path of wind as the truck cruises along a highway.

Tesla offers a guarantee that the truck won't break down within a million miles; because the truck has four engines, even if two of them fail the truck can still carry on with only the remaining two. Another guarantee is a full refund if the windscreen doesn't survive a thermonuclear blast, obviously, no-one can survive that to make that claim, or a windshield is probably the least of your worries at that point, but the windscreen is claimed to be much stronger than a standard windscreen. The reason for this is that truck windscreens break at least once a year, and once they break on the road the truck legally has to stop, so the Tesla Semi has whats called Tesla Armour Glass to try and avoid this and keep the truck on the road. 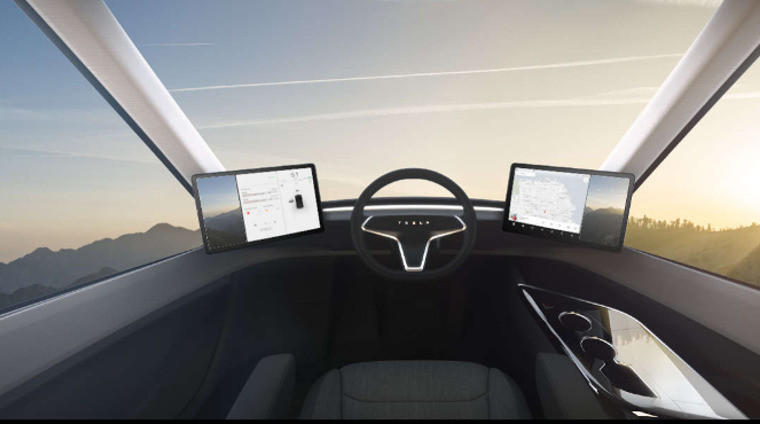 The truck also has a number of features related to automated driving; the vehicle will stay in its lane, it will try and avoid collisions, its impossible for the truck to jackknife, and it will even be able to call an ambulance if it loses response from the driver while on the road. It also has an app for diagnostics, fleet management, location tracking, and repair notifications.

Inside, Tesla also wants to avoid the clutter that current truckers endure by having to purchase a number of 3rd party devices, so the Semi has its seat in the middle, like a race car, in a spacious cabin that has a number of devices already built in. Tesla wants to try and provide all those functions provided by 3rd parties included in the original truck. 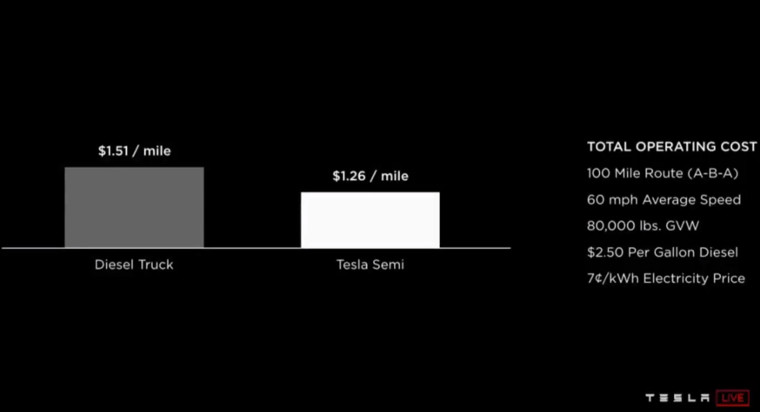 Somehow, according to their calculations which factored in all the real costs of trucking, the Tesla truck is also far cheaper to run than diesel trucks, as the above screenshot from the presentation shows. Yet these estimations only get better if the costs are calculated when the driver makes a Tesla Semi Convoy.

If the driver uses three Tesla Semis set into an automated convoy or train mode then the same estimations as above drop down to $0.85 per mile, this is so efficient that it is apparently even cheaper than transporting by train too.

Not content enough with only unveiling a truck that Musk claims will destroy all current diesel powered trucks and even trains, Musk also briefly showed off a pickup truck version of the Tesla Semi that is so big it can carry another pickup truck, but the details on this were very scarce. However, he had to go even further than this, at the end of his revolutionary logistics presentation a red Roadster ripped across the stage. 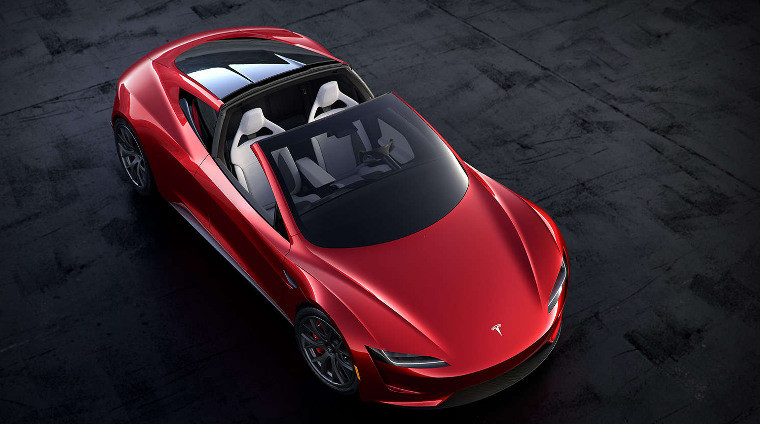 In 2020 Tesla will be releasing a new 4 seater (if your passengers are short) Roadster, paying homage to its first car. But the new Roadster is essentially being built to, quoting Musk, "give the hardcore smackdown to gasoline cars" making driving a gasoline sports car feel like driving "A steam engine with a side of quiche".

The Roadster will be able to accelerate from 0-60 mph in 1.9 seconds, from 0-100 mph in 4.2 seconds and will be able to do a quarter mile in 8.9 seconds, which will make it the fastest production car in the world. This is only the base model, which will also be capable of a 620-mile range while driving at highway speeds.

Just like at the end of Musk's presentation about colonizing Mars, it is hard not to feel that this is the cusp of a massive breakthrough, despite other companies developing electric trucks and Tesla having significant production challenges with its Model 3.

If this presentation gives us everything that it says, the Tesla Semi and next Roadster might be real foundations for the electric transport age and gear us towards the beginning of the end for diesel and petrol. Not just because of environmental reasons but even because of cost, speed, safety, and style.