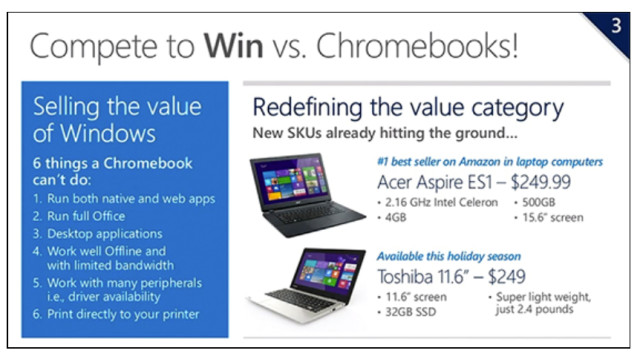 Several years ago, Microsoft and its many OEM partners created small Windows devices that were low-power, compact, cheap -- typically with starting prices around $199.99. The devices, called netbooks, were for the most part a disaster.

Because of the low price, consumers flocked to them instead of more expensive machines, but the experience was not optimal. On some machines, running full screen 720P video was not possible as the machine would choke on the process and deliver jagged video. The end result was that the machines were scrapped as customers became angry that their budget-friendly machines could not perform all of their daily tasks.

Fast forward several years to WPC14, where Kevin Turner has announced that Microsoft and its OEM partners are going full steam ahead back into the netbook arena to make sure that they dampen the fire of the Chromebooks.

On stage, Turner held up an HP Stream laptop that was bright and colorful, and announced that it would be coming this holiday season for $199. He also drove home the point that now that Windows is free on devices with a screen less than 9 inches, this has caused dozens of Chinese manufactures to adopt the OS. What this means is that where we once saw only Android tablets at the $99 price point (and below), we will soon see Windows tablets competing too.

This move is intended to place Microsoft devices alongside Google devices at the entry-level pricing. Microsoft clearly feels pressure here and is hoping that by allowing OEMs to create lower-cost devices, it can dampen the Chromebook momentum.

One of the problems that may arise is how Microsoft is marketing these machines. If you look at the image at the top of this post, which is a slide taken from the WPC14 keynote, they are marketing these devices as fully-capable laptops. But the truth is, they are stripped down machines that offer basic functionality.

The only machine currently available is the Acer Aspire ES1 which offers an Intel Celeron processor and a 500GB 5400 RPM harddrive which will be enough to cover the basics but won't allow you to run any intensive video or photo applications. So if anyone buys this for a back-to-school laptop, it will be less than ideal for the educational sector.

The other device, as shown on the slide, will come with 32 GB SSD, but what about when you factor in the size of the OS and your applications? The amount of useable space left will be quite small and will fill up quickly and leave you with few options. Even if it has SD support, it provides a sub-optimal experience if you have to swap out SD cards all the time when you are trying to locate a file. Of course, you could use OneDrive -- but if you are not connected to the web, your files may not be available at all. Then again, Chromebooks face the same issue, so it isn't solely relegated to Microsoft.

Seeing that several years have gone by since the last netbook extravaganza, even low-end hardware may still be more than capable for the basic consumer. Only time will tell if this strategy pays off this time but if the past is any predictor of success, consumers may be left less than satisfied with their purchase.