Despite previously allowing Nokia Lumia customers to change the default search engine to Google on their handsets, it seems that Microsoft has now decided it is time to disable the option on the latest unlocked Lumia devices.

The option used to be accessible in Windows Phone 8.0 by accessing the advanced settings in Internet Explorer, though the company’s latest handsets, the Lumia 630 and Lumia 930 no longer have this setting available in the version of Windows Phone 8.1 that they ship with. 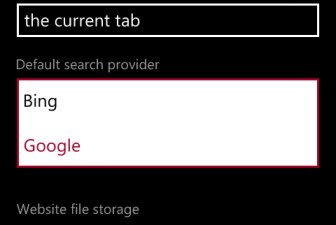 The issue does not appear on any older Nokia Lumia hardware which is currently being upgraded to Windows Phone 8.1, this could mean it is a firmware change.

Although this decision seems to be only affecting new unlocked Lumia 630’s and Lumia 930’s, devices which are purchased under contract seem to still be shipping with the option to switch search engines.

If this is a new decision by Microsoft to disallow other search provides to be set as default on Windows Phone devices, it may open up a whole can of worms not just amongst users, but also companies such as Google and Yahoo. Especially as both Google and Apple allow their mobile device users to change search providers whenever they want to.