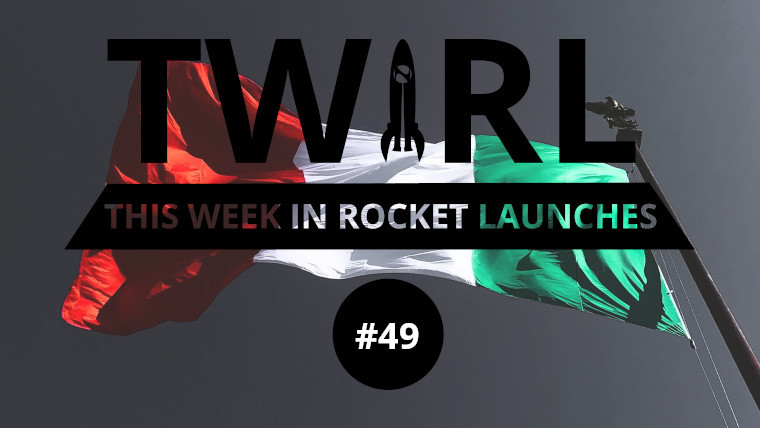 If you read TWIRL 48 last week, you may remember that the launch schedule was a little slender. Over the week, another launch got locked in for tomorrow (Sunday) so before detailing next week's launches, we'll tell you about the one coming up tomorrow.

This launch was not fixed in ready for the publication of TWIRL 48 but now we know that Astra Space is planning to launch its Rocket 3.3 in a mission called VCLS Demo 2. The mission is being carried out under NASA’s Venture Class Launch Services Program and is carrying several satellites including CURIE A, CURIE B, BAMA 1, INCA, QubeSat, and R5-S1. The launch is due between 1 p.m. and 4 p.m. UTC from Florida.

The first launch of the week will be a SpaceX Falcon 9 carrying the second COSMO SkyMed Second Generation satellite for the Italian space agency. The satellite, called CSG 2 for short, will be able to monitor the Earth to assist in emergency prevention, strategy, scientific, and commercial use cases. Specifically, it will enable risk management, cartography, forest & environment protection, natural resources exploration, land management, defence and security, maritime surveillance, and food and agriculture management. The launch should be available on SpaceX’s website. It’s due for lift-off at 11:11 p.m. UTC.

The final launch of the week also comes from SpaceX. It will send up a Falcon 9 to carry another 49 Starlink satellites into orbit. Eventually, the company wants thousands of these satellites orbiting the planet to ensure internet connectivity is available everywhere. This launch should be available on the SpaceX website too but it’s not clear what time the launch is planned for.

SpaceX has faced criticism for its Starlink satellites for ruining astronomy or creating space junk but yesterday we reported that Elon Musk could use the expansive Starlink network to help Tonga get back online following a catastrophic tsunami that knocked the country offline.

The first launch we got last week was a Long March-2D carrying the Shiyan-13 satellite from the Taiyuan Satellite Launch Center in China. The satellite will now be used for space environment exploration and will help the country perform other related technical tests.

The next video is not a launch at all but satellite imagery of the undersea volcano that erupted near Tonga and caused the tsunami which ultimately knocked out the country’s internet.

On Wednesday, SpaceX launched its Starlink 35 mission which was carrying 49 Starlink satellites to bolster the internet-providing satellite constellation.