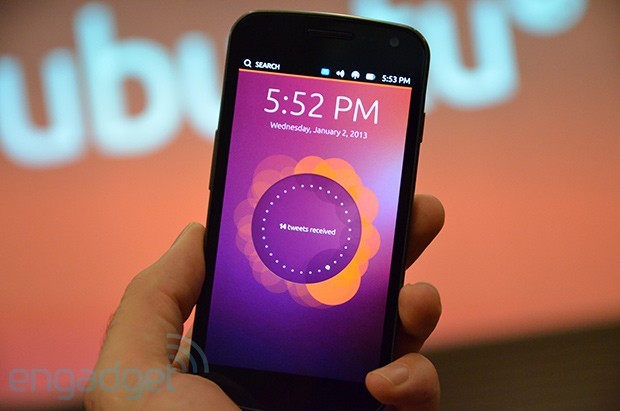 Earlier this week, Canonical teased the world with a countdown clock on its main Ubuntu website, with the reveal to be made today. Well, the website got so much traffic today it basically collapsed before the clock ran down to zero. Thankfully, Canonical also decided to hold a real press event in London today for its big announcement.

And what did that turn out to be, pray tell? As expected, Canonical revealed that it has developed a touchscreen-based version of its free Ubuntu Linux-based OS. The new version was made specifically for both high end and budget smartphones. Engadget reports that a version of the OS was demoed on a Galaxy Nexus smartphone at the press event.

The main difference between Ubuntu and other touchscreen mobile operating systems is that it apparently uses edge swipes a lot more than just buttons like iOS and Android. Canonical claims " ... thumb gestures from all four edges of the screen enable users to find content and switch between apps faster than other phones." In some ways, this makes the Ubuntu smartphone OS similar to Windows 8 in terms of its interaction.

Canonical is pushing for this new version of Ubuntu to be installed on smartphones for enterprise markets, and employees in theory could have one OS that will work with PCs, smartphones and servers. However, Canonical made no announcements on which smartphone makers or carriers will begin to sell Ubuntu-based phones.