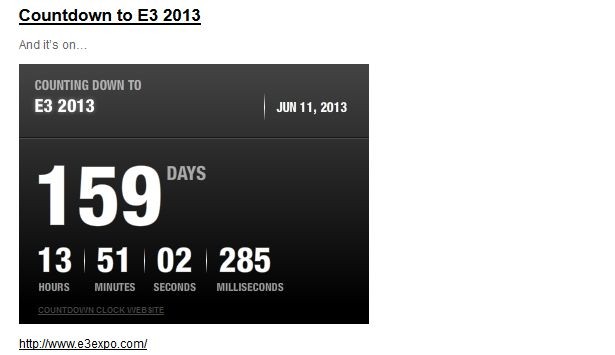 Microsoft has been attending the Electronic Entertainment Expo video game-based trade show, better known as E3, since it started in the mid-1990s. This year's E3 will officially be held on June 11-13 in Los Angeles but typically Microsoft holds a pre-E3 press conference in LA the day before the trade show officially starts.

Today, the Major Nelson website, run by Microsoft's Larry Hryb, did something that it has never done before. It posted a countdown clock that will reach zero when E3 2013 begins. Hryb's only statement on the post was, "And it’s on…"

Already many commentators on the post are speculating that Hryb went ahead and posted the countdown clock so early as a tease that Microsoft has some extra-special planned for E3 2013. Unless all the Internet rumors and leaks prove to be bogus, it's likely that Microsoft could use E3 as the first place to show off the third generation Xbox game console.

Some rumors, including one report in one of the last print issues of Xbox World in November, claimed that the next Xbox would in fact be revealed well before E3 2013. However, we suspect that may not be correct as Microsoft still has a number of major Xbox 360 first and third party games that are due to be released before June, including Gears of War Judgement in March. We don't think Microsoft would risk revealing the next Xbox before all of those games ship to stores.