Chinese smartphone maker, UMi, is yet to become a familiar name across the globe, but the company has been making devices under its own brand for the last three years and is continuously expanding to new markets in Asia, Europe and Africa.

The company's latest mid-range offering, the UMi Max, went on sale through online stores last month for a price of about $220, but is already available for as low as $201 through Amazon in the US. Unlike other devices branded as "Max" - such as the Xiaomi Mi Max or the Nubia Z11 Max, that we reviewed this year - this one isn't a phablet. It has a 5.5-inch screen, which is pretty much becoming the standard, and features a spec sheet that is also commonplace among Chinese smartphone manufacturers these days.

The UMi Max sits just below the company's current flagship smartphone, the UMi Super and targets budget conscious customers with its attractive price. The phone's design is very similar to devices such as the Redmi Note 3, the Lenovo Vibe K5 Note or the Honor 5X from last year.

However, even with these similarities and comparable pricing, there can be many things that help devices differentiate themselves in the crowded budget smartphone segment. Let us see whether the UMi Max offers any advantages over its competitors.

The UMi Max comes in a compact black coloured box. It has a faux leather texture, which gives the packaging a nice premium touch. Inside the box, the smartphone is accompanied by a USB Type-C cable and a charger. 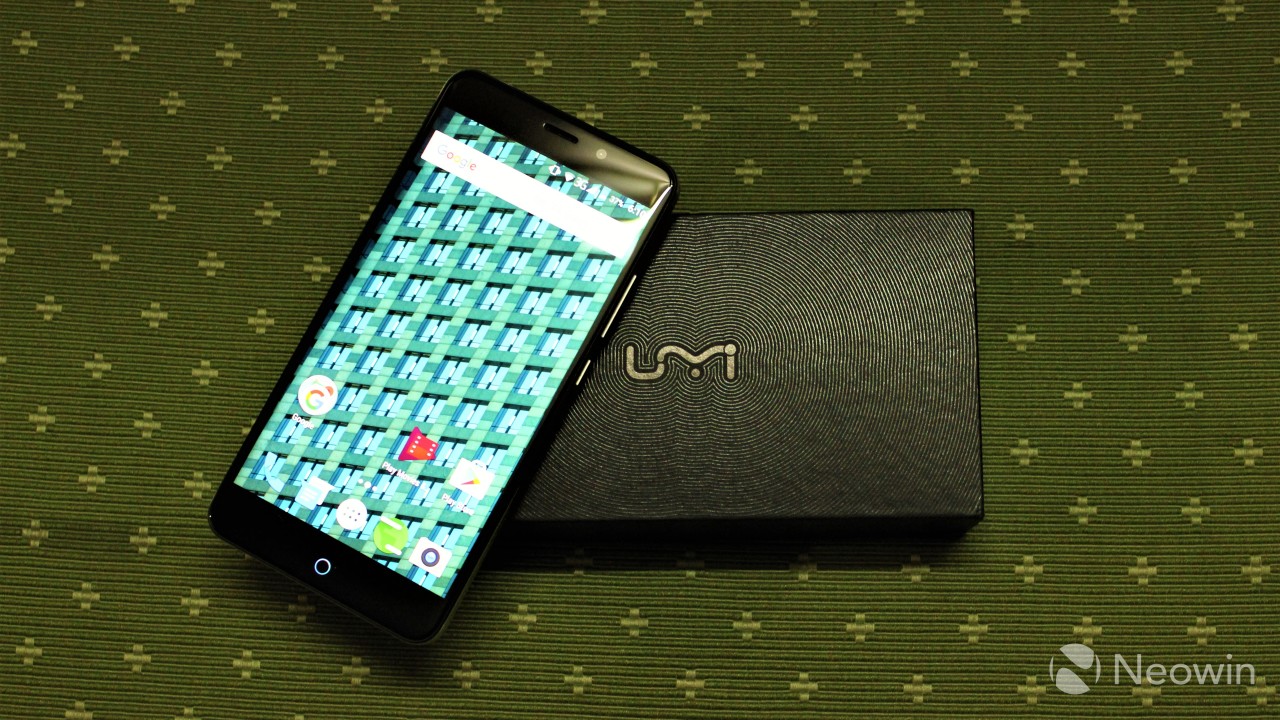 Other than these, there is a usual set of leaflets containing warranty and support information but no headphones, screen protection or case.

At a first glance, the UMi Max looks like a smartphone from the HTC One series, and it even feels like it, but that isn't a bad thing at all. The device has a great build and the unibody metal frame feels very sturdy and well-crafted. I wasn't very concerned by its likeness to most other Chinese smartphones as the exterior isn't the only thing that defines the smartphone and it isn't a bad design by any means. 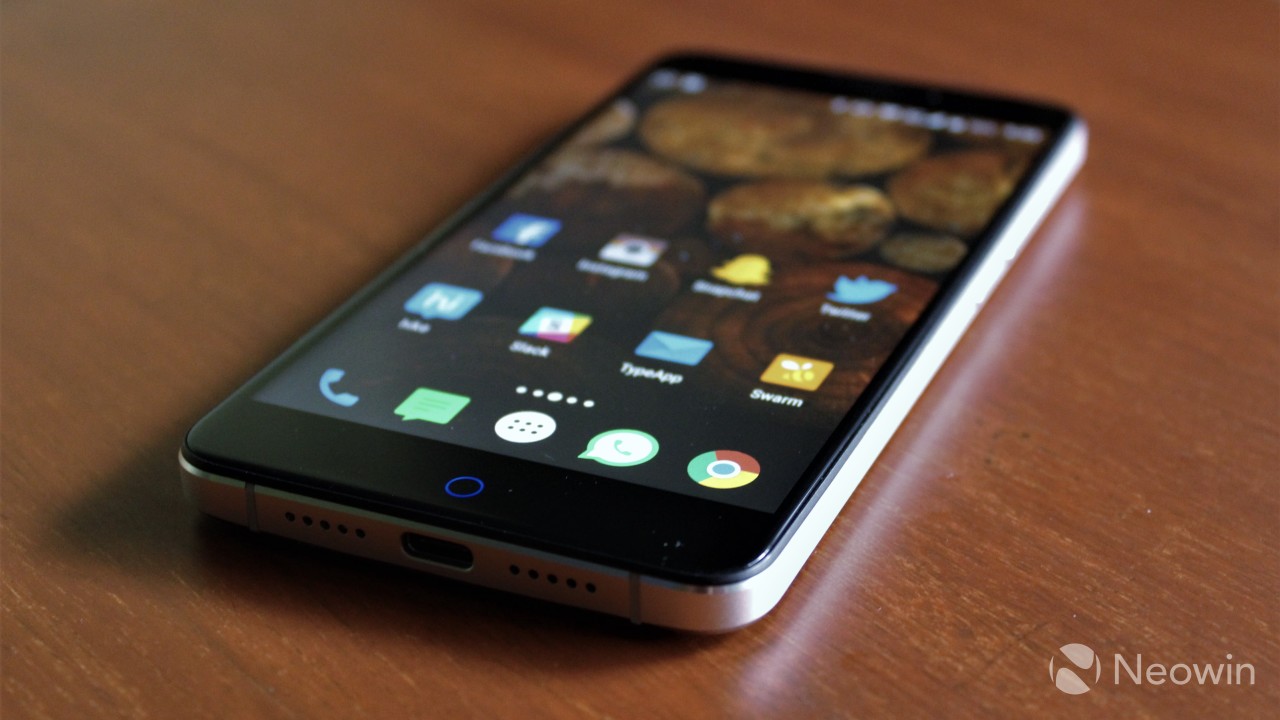 The smartphone's rear side features the 13-megapixel camera and a fingerprint sensor, while the front is covered in its entirety by black glass, which houses the ambient light and proximity sensors along with the front camera at the top. 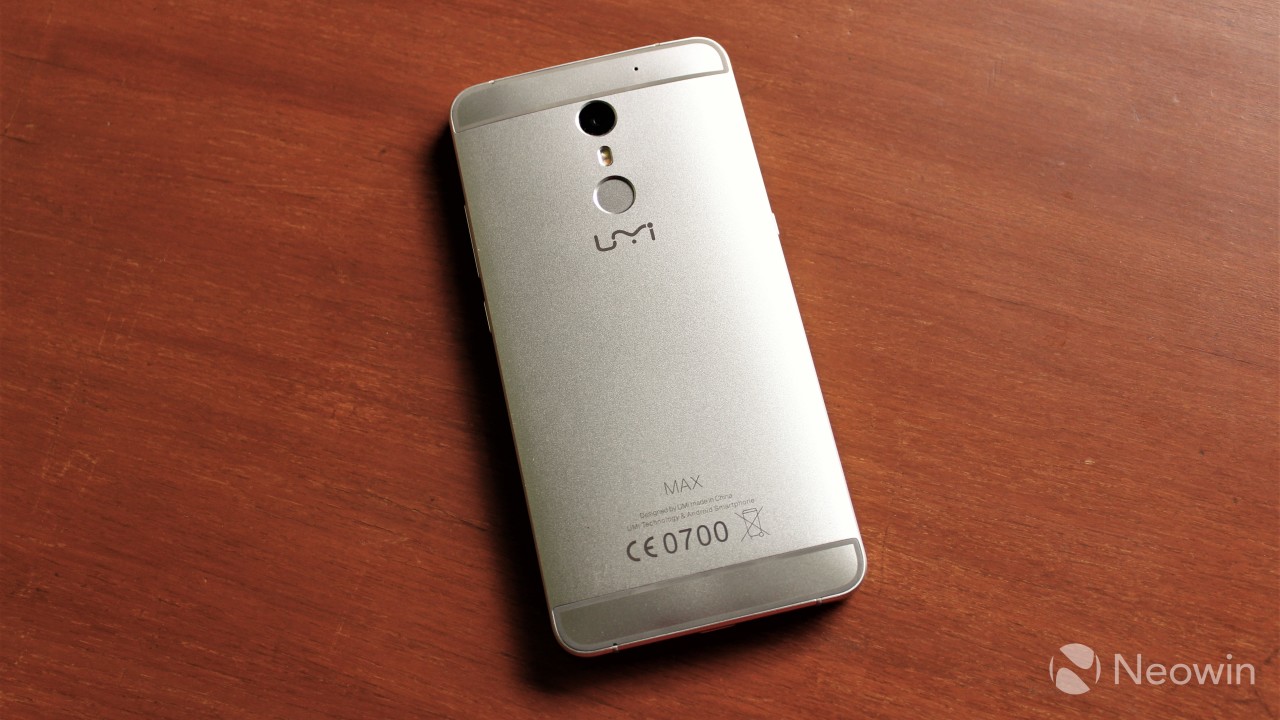 On the right edge of the device, the power button and the volume rockers are aligned one after the other, while the left edge has a customizable button and the SIM tray.

On the top edge of the device, the 3.5mm headphone jack is present and the USB-C connector is placed on the bottom edge between the speaker and mic grille. The smartphone is well rounded and its metal frame is quite plain with slight chamfered edges. Overall, the UMi Max has a nice design and feels a lot like a premium smartphone.

UMi has fitted a SHARP-made 5.5-inch LCD in the smartphone, which has Full HD (1920x1080) resolution and a pixel density of 401 pixels per inch. The display quality of the screen is quite good and has reasonable daylight legibility. On some occasions, the automatic brightness wasn't up to the mark but setting the brightness to about 40 percent was sufficient in most lighting situations. 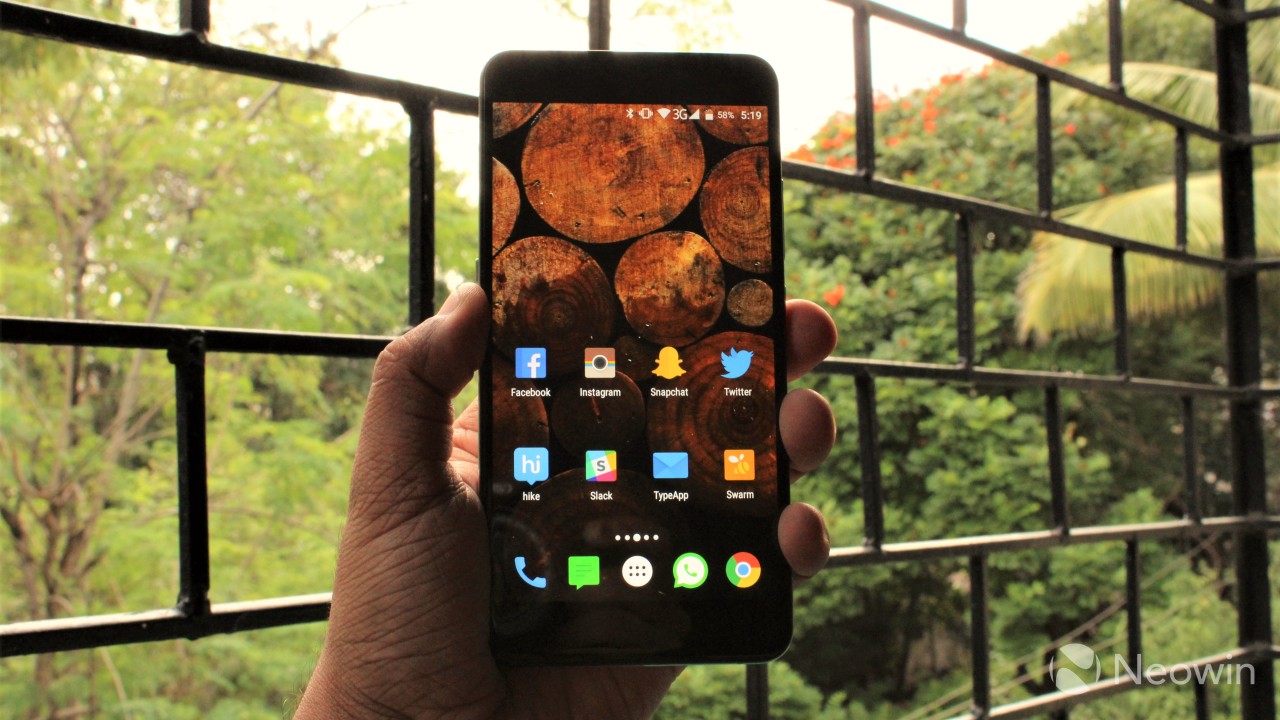 Viewing the smartphone from an angle isn't an issue and I was especially pleased with the way the deep black glass with its 2.5D curve looks from the edges. It gives an illusion of being bezel-less and makes the device look more premium. The color saturation and black levels of the UMi Max are also good, and there's nothing disappointing about the display in day to day usage.

The smartphone's glass has some sort of coating on it, which attracts a lot of smudges that are hard to get rid of. That was one annoying part about the display as these smudges were very apparent under bright light and had to be wiped off very often. 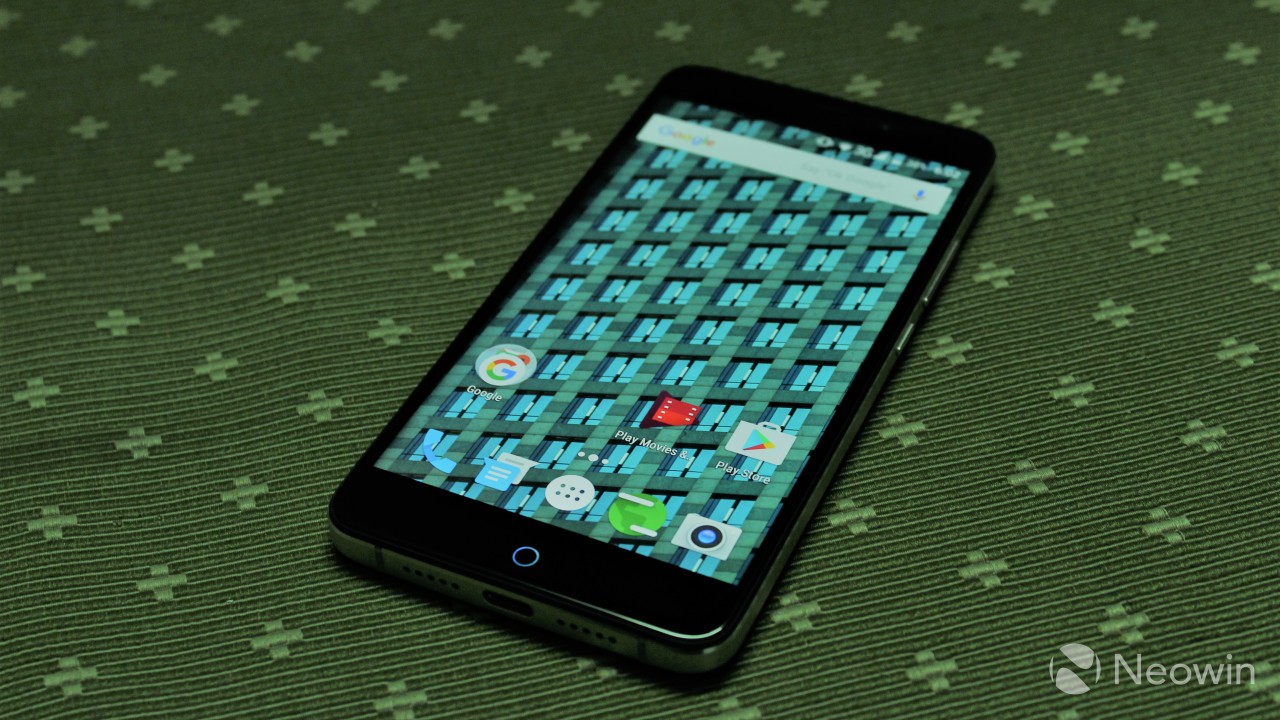 Overall, I found the display to be better than my expectations from a budget device. However, with AMOLED screens becoming available on entry-level Galaxy J2 and J3 smartphones from Samsung, lesser known brands such as UMi might need to think about switching over for their future devices.

There isn't anything special about the UMi Max's audio quality, and it strictly gets the job done and nothing more. Audio output from the headphones was decent enough, but the volume levels were quite low compared to my Redmi 3S Prime. The loudspeaker output has a hollowness about it and lacks bass. The position of the loudspeaker inside the bottom grille often results in muffled sound when holding the phone in landscape mode.

On the calling and network front, there weren't any issues as the phone was able to connect and get decent coverage throughout my usage. On Jio 4G in India, I was able to make VoLTE calls using the carrier's voice app as well. Using the device with two sims, one 4G and another 3G did not cause any network drop or data issues that are sometimes common on budget devices.

The sound quality on both the caller and receiver ends was perfectly fine and there wasn't a lot of distortion in crowded areas as well.

The camera quality on the UMi Max isn't the greatest, but the 13-megapixel rear camera with a f/2.0 aperture does manage to capture decent images in daylight. In low light, the quality is quite poor and there is a lot of noise in the photos.

Some photos taken with the rear camera in very bright conditions look washed out at times but in general they weren't too bad. In dim lighting conditions, the quality diminishes a lot and the images produced are highly disappointing. The viewfinder is also quite slow in such conditions and there is a noticeable lag when taking images. The 5-megapixel front camera does a good job in well lit areas, but suffers in a similar fashion in low light.

Given the device's performance with still images, I didn't expect it to be any better in case of videos and it did turn out to be the same case. The frame rate on the videos shot with the UMi Max is rather poor and the sound captured is distorted. In night time, this is even worse. Even though the specifications mention that video is captured in 1080p at 30 frames per second, it doesn't feel as such.

Ultimately, it is safe to say that the camera is bearable and only works for utilitarian purposes in ideal conditions.

One of the best features of the UMi Max is that it comes with near stock Android Marshmallow and absolutely no bloat. Even the extra Google apps such as Photos, Google+, Hangouts, etc were absent and the device had a lot of room for me to install apps that I use rather than waste space on redundant ones from the manufacturer or Google. 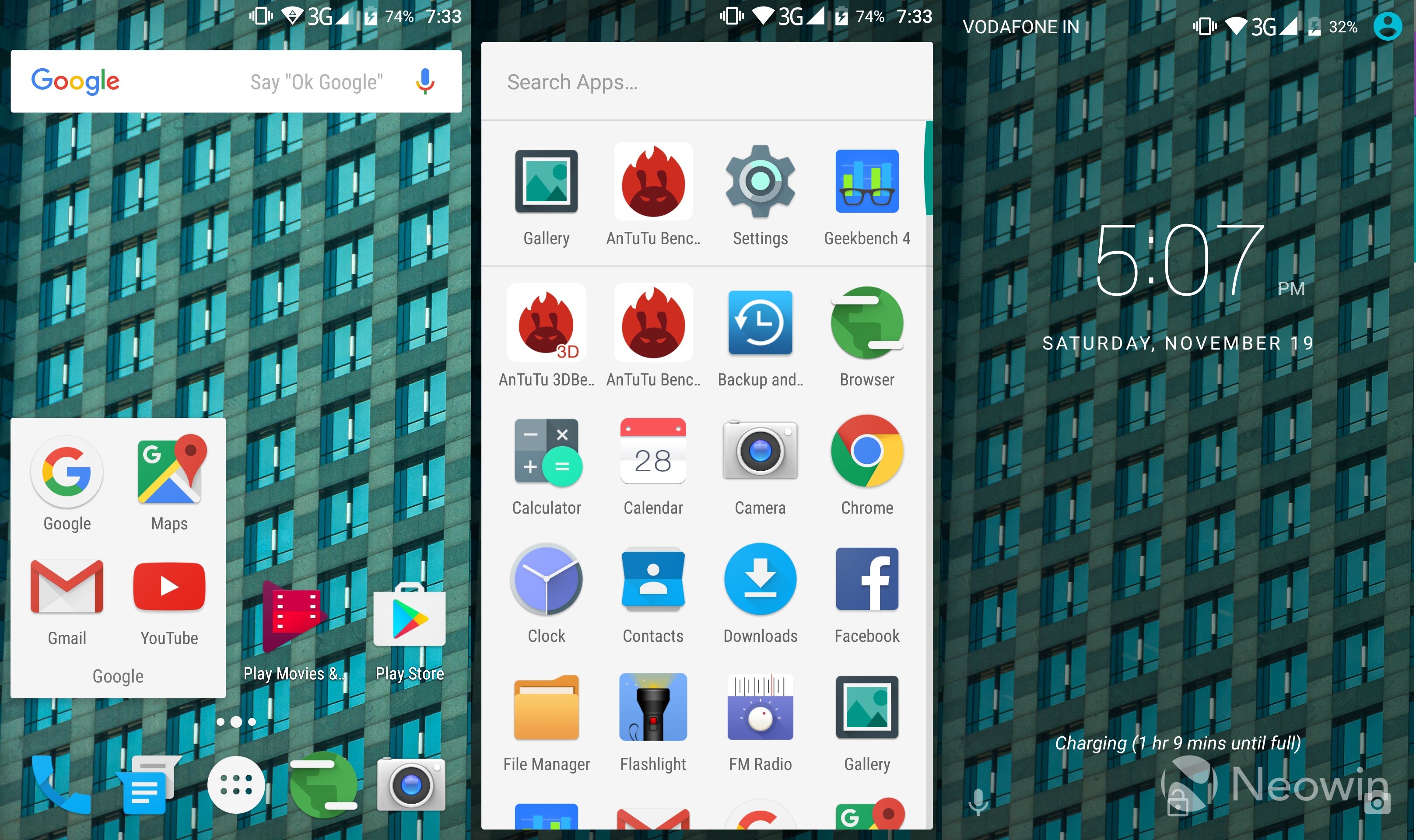 Since the device has just 16GB of internal storage, having the extra space, which otherwise would have been occupied by useless pre-loaded apps, was a nice addition. The user has access to nearly 11GB of storage for apps and other data, which can be expanded further using a microSD card up to 128GB instead of a second sim card.

UMi has released at least two bug fixes and stability improvement updates during my time with the device, and the company is also promising an update to Android 7.0 Nougat in December, which is something rare in case of budget phones.

The UMi Max comes with the Helio P10 octa-core chipset from MediaTek, which is a decent system-on-chip for budget devices and most of the devices in this range are already using it. For day-to-day tasks, the chipset is good and I also played games such as Asphalt 8 and Dead Trigger without facing any significant slowdown. 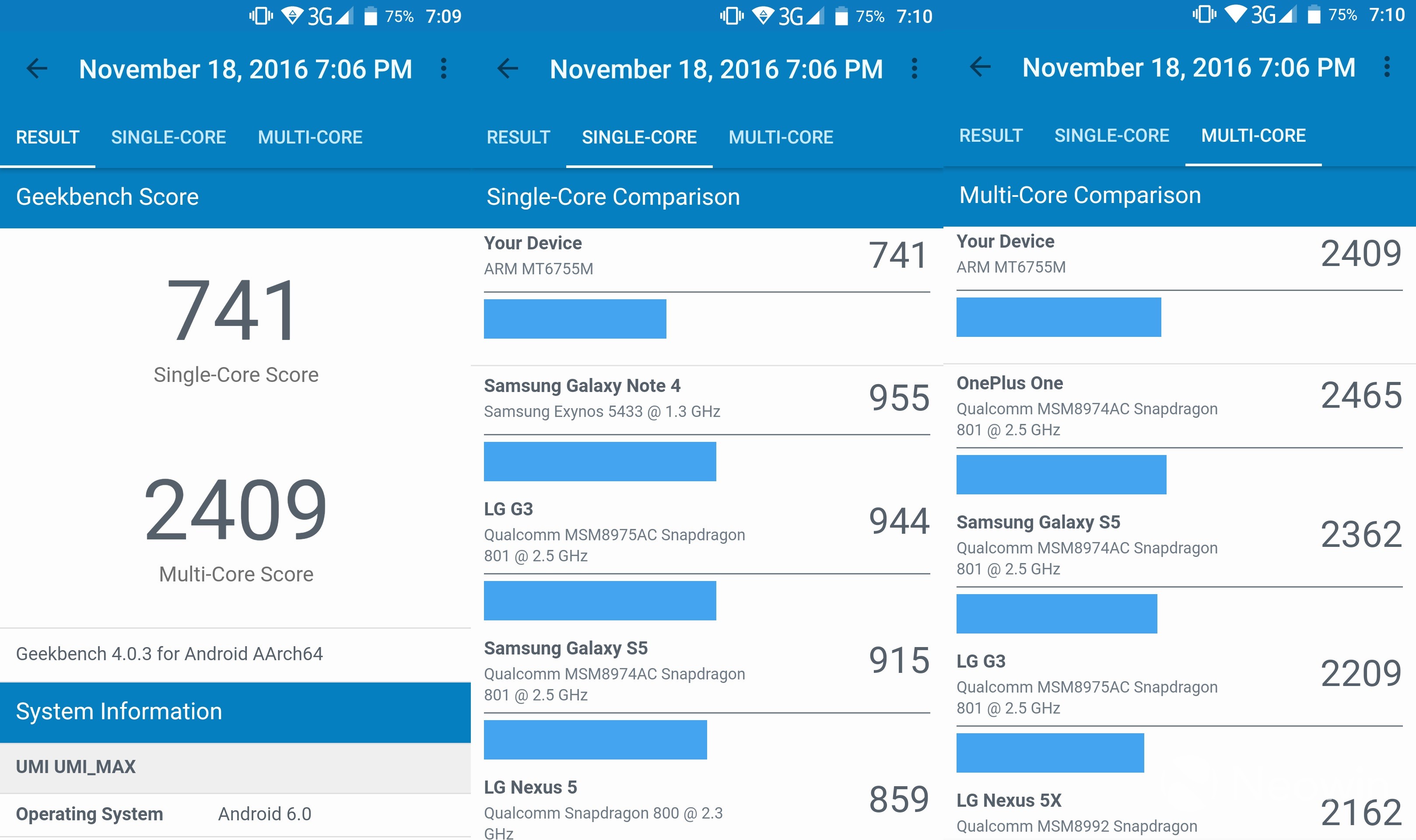 More than the chipset, I suppose having 3GB of RAM has made the device a decent performer in normal tasks. Having multiple apps running in the background wasn't an issue due to the sufficient amount of RAM.

With heavy usage of social apps such as Facebook, Twitter, Instagram, WhatsApp, Messenger, Slack and Snapchat, the device's maximum RAM consumption hit about 2.5GB on a few occasions. However, I didn't come across any crashes or the need for killing tasks.

Unlocking the device using the fingerprint sensor was also quite a snappy experience, and I found it very accurate as it managed to recognize my prints nine out of ten times without any issue. 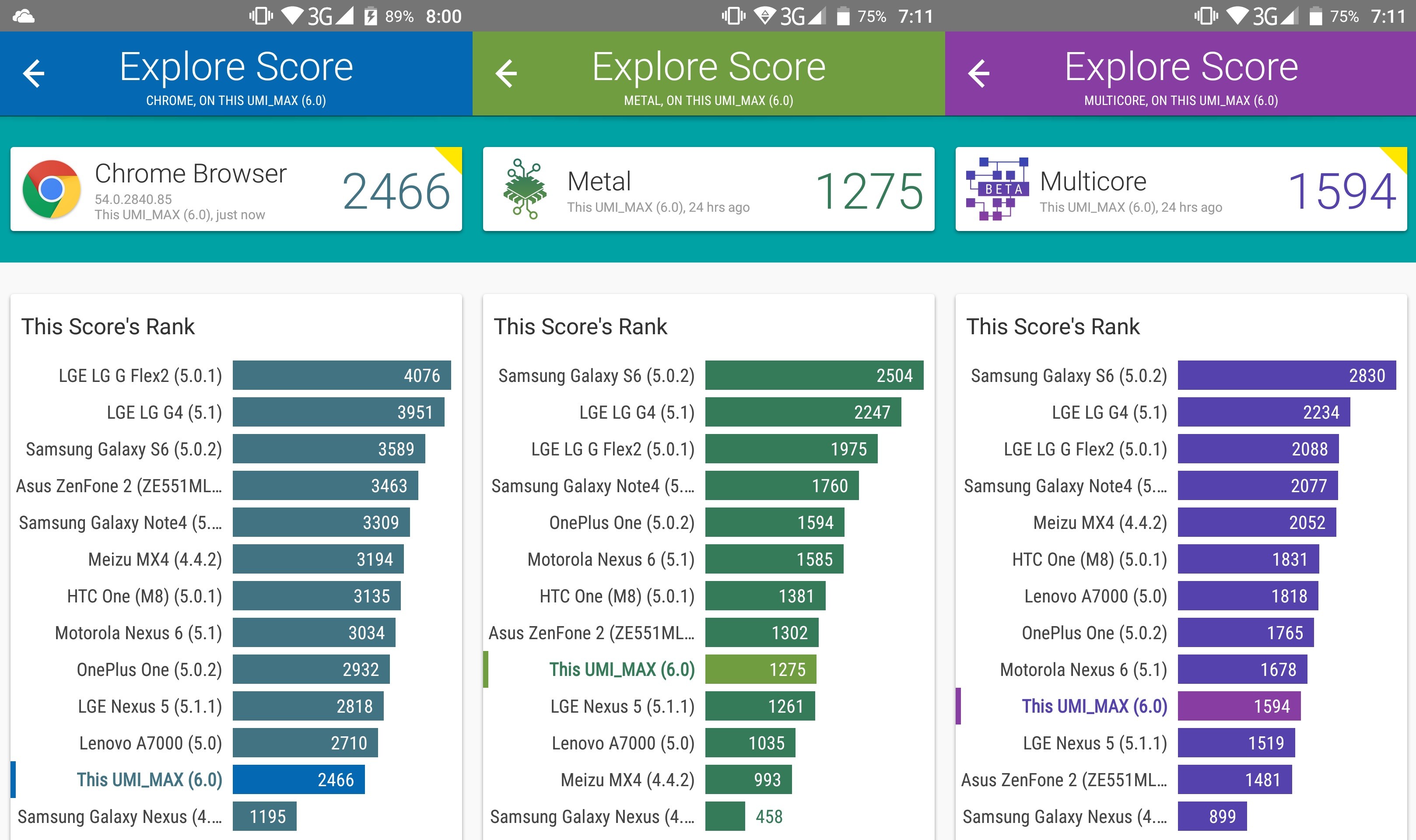 Benchmark results for the device are similar to other Helio P10 devices, which means it isn't comparable to Snapdragons in the same class. However, at this price point I don't think these results should matter as much, especially since the Max's handling of regular tasks is quite good and it's a matter of priorities for the user interested in getting this phone.

The battery scores yet another strong point for the UMi Max, as the device lasts for a really long time on a single charge. It also supports a proprietary fast charging mechanism. However, the turbo charger is not shipped with the device. I used a UMi Super fast charger with the device and managed to get a full charge in about one and half hours. 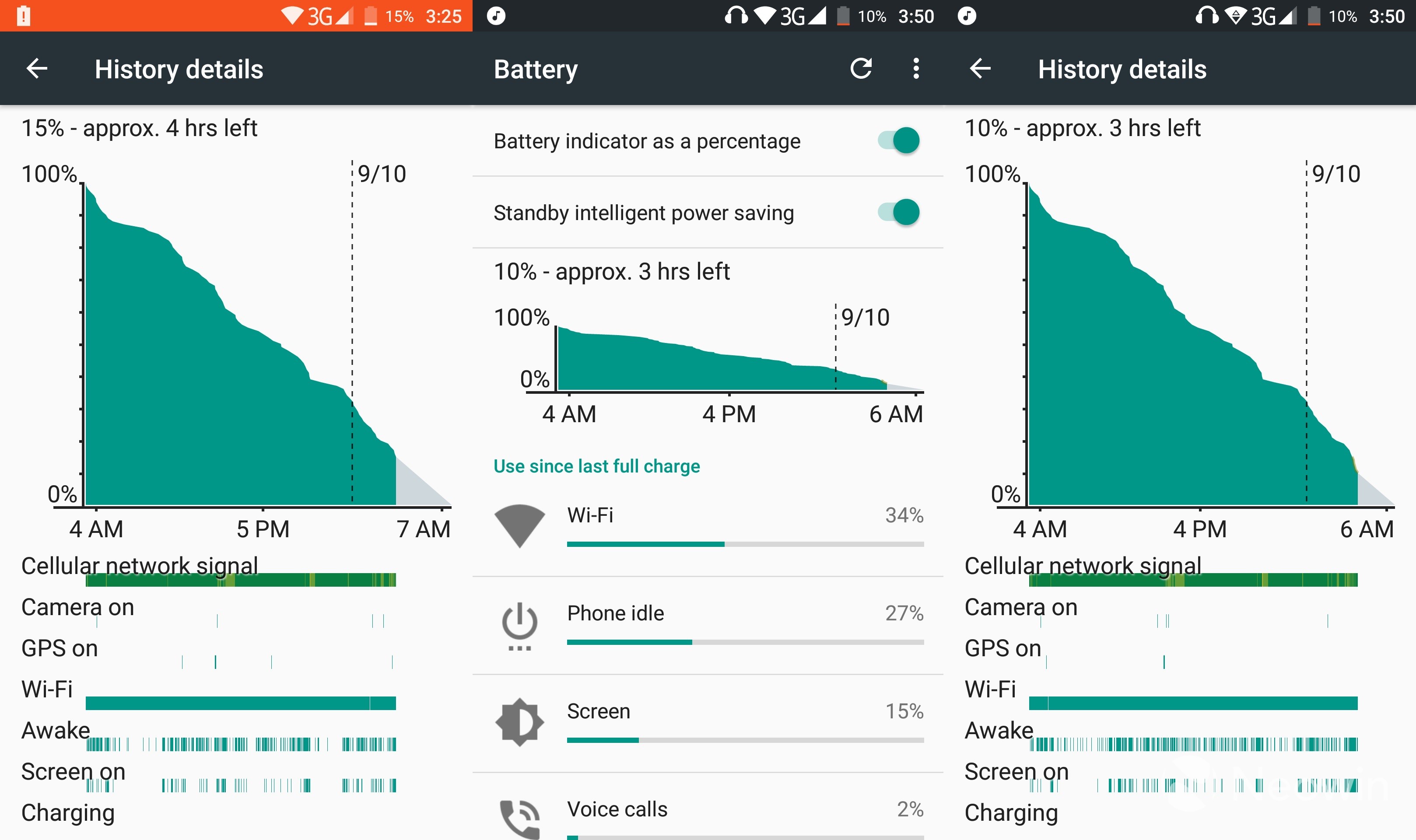 Prolonged usage of the device with apps such as YouTube, benchmarking apps and graphics heavy games was a matter of concern at times as the device got a bit warm, but it didn't drain through the battery life as much as I expected.

On a 100 percent charge, the best I could manage was about 1.5 days with 5 hours of screen on time. The battery saver mode also works quite well to get the phone through the final 10-15 percent of juice. In case of the battery, the phone's relatively clean build of Android seems to have helped it quite a lot as very few background services were found to be using the charge.

The UMi Max is a a good smartphone with no nonsense features, and yet it might not be on buyers' radars due to its low key presence internationally. I certainly recommend it to someone looking for a device that handles normal usage very well and has some of the modern niceties such as a fingerprint sensor, USB-C and a premium metal design. Also, the promised Android 7.0 Nougat update is something to look forward to.

However, if a good camera phone is what you are looking for, then this one isn't it and you should probably consider the Moto G4 or the G4 Plus, which have similar specifications and good cameras but also are a bit expensive in comparison. The lack of NFC might also be an issue for some as Android Nougat is expected to bring better support for digital payment systems.

In the US, the UMi Max can be purchased from Amazon for about $200. In other countries, the device can be purchased through Chinese retailers such as GearBest or TOMTOP for nearly $160. A complete list of official UMi sellers on Amazon in Europe is available here. To know more about the device, you can head to the company's listing of the device.