Sony has come up with some Windows 8 PCs that are a little different than other designs, such as the Sony Vaio Tap 20 all-in-one PC that can also serve as a really large tablet. This week, images and a very blurry YouTube video have outed an unannounced Sony Windows 8 PC that has yet another unusual case.

The YouTube video and the press images, first posted on the Notebook Review forums, both show a 13 inch tablet with a display that slides up to expose a full notebook keyboard.  The video says that the hybrid has an Intel Core i5 processor, 4 GB of RAM, a 128 GB SSD, a five megapixel camera and 10 hours of battery life. 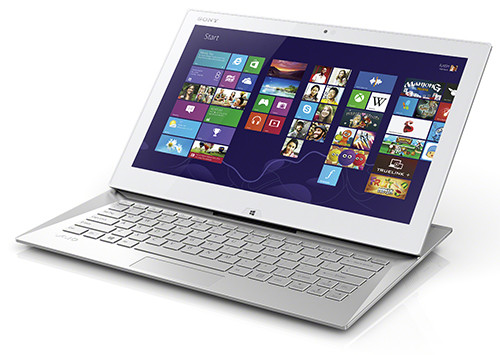 The forum post claims that the grainy video comes from a training film made for the Dixons UK retail store chain. As you can see, the notebook is being used in tablet mode accessing Microsoft's Fresh Paint app for Windows 8. The device looks pretty thin but there's no word on an exact weight for the product.

All in all, this somewhat mysterious Sony hybrid looks promising and hopefully the company will reveal more about it in the very near future.

Update: The video has now been made private.